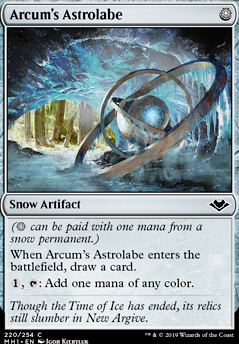 ( can be paid with one mana from a snow permanent.)

When Arcum's Astrolabe enters the battlefield, draw a card.

Arcum's Astrolabe occurrence in decks from the last year

Hi_diddly_ho_neighbor on Kaldheim Predictions and Speculation

Ehh, I disagree. It's at best marginally better than normal. Snow lands, spells, and creatures are still hit by all of the same things that hit their normal counterparts and most snow creatures/spells require deck building restrictions in order to actually trigger/be cast. I just think people developed bad feelings towards snow due to Arcum's Astrolabe.

enpc: it does things well because it just does. people like Rings of Brighthearth. lithoform engine does the exact same thing and more. tapping it doesn't really matter. you're likely not gonna have the mana to use the effect of Rings of Brighthearth twice in the same turn, nor would you usually want to. lithoform engine doesn't require you to wait for a good spell or ability to copy. just use it on whatever you were doing for that turn anyway. why wait when you can use it every turn?

I didn't ever say the card was bad. I called it win-more, underwhelming, a multitool, bulky and that it falls short.

your comment didn't align with what op was talking about because you brought up a different point entirely. going in "every deck", and performing well, are 2 entirely different issues.

Flooremoji none of those cards homogenized formats. Once Upon a Time does not have an "alternate cost". nongreen decks "could" use it, but thats highly unlikely and became literally impossible after playing their first spell. so it can certainly be excluded from a deck based on color. as for Arcum's Astrolabe, it is exactly what pauper needed. wotc knew good and well what would happen when they released that card.

DragonSliver9001: Ouat had a alternative casting cost. In modern E-tron lists would play 1 Forest and still be able to get vaule of it. MM and gitaxian probe had phyrexian mana costs, and Arcum's Astrolabe required a basic land to cast it. None of these cards could be exculded from your deck purely by casting cost or color.

All of these examples did homogenize formats before they were banned, maybe not commander, by formats like modern and legacy. It is also possible that my defintion and yours of homogenizing formats is different, but these cards weren't okay. Ouat was number 1 played spell in modern shortly after release, AA was probably close if not there. The phyrexian spells could fit into any deck that wanted a free cantrip and information or interaction. MM was the best answer to itself so it was hard not to justify plying it.

seems like a silly reason not to like a card. there are over 20,000 cards in the game. not all of them can be specific to certain decks. the game needs cards that can fit into a wide variety of decks. do you take this much issue to all colorless cards? kinda just seems like you wanted something made special for you and your riku deck. it's nice to have cards that are good that can be put in any deck. wotc should print more cards like these if they'll quit banning them (cards like Smuggler's Copter and Arcum's Astrolabe).