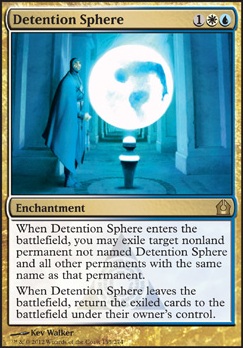 Detention Sphere occurrence in decks from the last year

Azor, the Bureaucracy
by hartbreaker88 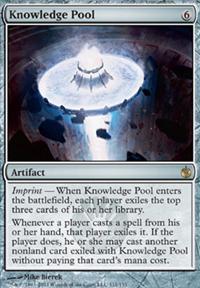 Draw some cards
by DrPerry

Testing out a couple of cards Iâve had my eye on the past few of years. Going to swap out Detention Sphere for Eerie Interlude and see if I like the extra blink/protection. This decision has been a long time coming. After hundreds of games over the past 5~ years of me using Brago, I think I used D Sphere 3 times? I have other modes of removal in the deck, and would prefer a extra means of blink value and protecting Brago from a board wipe. The other change is Lyev Skyknight, a long time pet card of mine, to Soul Herder. Loved Skyknight in RTR block, one of my favorite cards, but I think that having more blinking options would help boost the speed of the deck. The next couple of changes Iâll likely make after I play a few test games with the new cards will be Out: Dissolve Angel of Serenity and In: Disallow Agent of Treachery. These changes will be made at a later date.

jaymc1130 on Interaction between Gideon and Yorion

Realistically, your best bet for protecting Gideon from targeted removal is going to be Teferi's Time Twist. In addition to protecting him it has nice synergy with the Ozolith itself. Again, not really a competitively viable play pattern, but certainly the best method to protect Gideon with an instant speed spell in such a deck.

Detention Sphere could be an interesting piece as well as it's flexible in a Yorion deck.

But the best pieces for Yorion to work with are the ones that set up flicker loops easily which can make for lots of mana free Gideon flickers over a sequence of turns such as Felidar Guardian, Charming Prince, and Saheeli Rai (some of which are legal in Pioneer). Saheeli lets you flicker with Yorion on your turn twice (activation and end step), while the Prince nets a flicker on opposing endsteps and your endstep. With both you'd get 2 flickers on your turn and one at the opponent's end step with Ozolith gaining 13 loyalty counters per turn cycle. While this is more competitive than anything else in all likelihood, it's still got some weaknesses in both play pattern and deck construction that can potentially be exploited. As true Copy Cat is banned in Pioneer this is likely the best bet to make a Gideon+Ozolith combo truly function as the individual pieces are easier to sequence (Ozolith on 1, Prince on 2, Saheeli on 3, Gideon in 4, Yorion on 5) though card intensive enough to be inconsistent, especially in an 80 card deck. The upside is that with such pieces many of them play nice with Yorion itself and can provide some nice value while also digging for the combo components with cards like Omen of the Sea and Arcum's Astrolabe (not to mention the Prince itself can scry provided there's another means to flicker Yorion).

I've got a Fateshifter brew too, and I like your take with it. Being able to reset your walkers is a huge bonus. I've gotten a lot of use out of Detention Sphere in my build but you may not need it