Whenever another nontoken Dragon enters the battlefield under your control, create a 5/5 red Dragon creature token with flying. 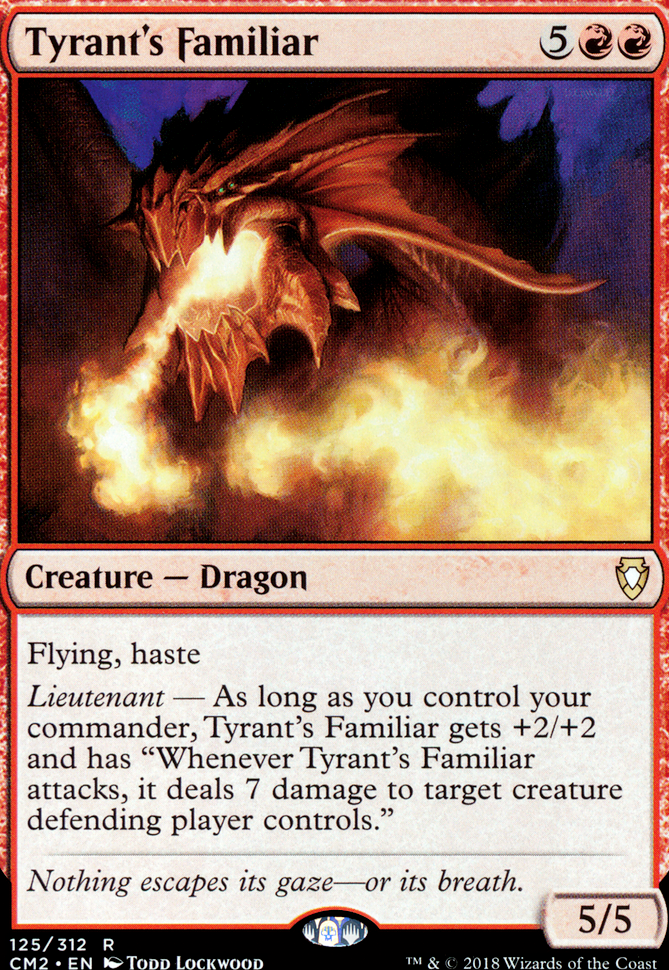 I was putting together my Lathliss, Dragon Queen deck, and it seems the media promo for Lathliss is not in the database. I used the code (000), and it tells me the card does not exist. Am I just doing something wrong, or is it truely not there?

Hi bomb_arie! Good thought on Bladewing's Thrall! It's definitely a strong payoff, though there's a few reasons why I've omitted it (and, to a lesser extent, the similarly-styled Boneyard Scourge):

Synergy: Thrall doesn't trigger Dragon Tempest, Lathliss, Dragon Queen, or Scourge of Valkas since its a Zombie, while Terror of the Peaks works alongside everything. Since our commander needs a long time before it comes down, the early and mid-game plays have to be consistent and impactful, and a 3/3 flier, while helpful, can be out-classed. Speaking of early and mid-game...

, Goblin Engineer, or Merchant of the Vale, and isn't a game-winning combo piece like Dualcaster Mage. Without providing additional benefit to the deck, its hard to justify adding it in - the strategy is already convoluted (ramp! draw! discard! reanimate! combo!), anything that doesn't facilitate one of those aspects is going to be hard-pressed to have a slot.

If there's a card in the list you'd want to discuss swapping out in favor of Thrall, I'd love to chat it out :)

So, I don't know if you've had time to update this list of late, but I would like to make some suggestions, and maybe what to cut for them. An old add that I was disappointed not to see was Manaweft Sliver as its redundancy, and maybe Homing Sliver since you're running a decent amount of the Sliver lords. Speaking of, I would play Cloudshredder Sliver over Bonescythe. Two keywords, one being evasion, is better to me over double strike. Lathliss, Dragon Queen over Utvara Hellkite, as it costs two cmc less and does something similar. I'm also going to run Najeela, the Blade-Blossom and Yuriko, the Tiger's Shadow.

Thanks for the suggestions, DeinoStinkus!

Lord of Atlantis is an interesting one. When I think about it, I'd be hard pressed to have a game when there wasn't an island around somewhere. Might be good to be able to swing at one person for free, and possibly lethal. What makes me hesitate is the mana cost... We'll see. I'll think about it.

The thing about Lathliss, Dragon Queen is that her most important ability has to do with dragons entering the battlefield, which I unfortunately can't control with Mirror Entity. That's pretty much the only caveat to this Everything Tribal build; I can only use static abilities that affect creatures that are already on the battlefield (at least, that's the way I think it works?).

Again, thanks for the suggestions! Since there are so many tribal cards out there, I'm 100% sure I'm missing something, so comments like this help out a lot.

There's also a new Dragon that for me at least seems to be an auto include: Terror of the Peaks. It's 5/4 Flying Warstorm Surge with minimum protection for only . I think it might work very well alongside Dragon Tempest/Scourge of Valkas or even with Lathliss, Dragon Queen on it's own.
What do you think about it and what would you cut for it if you'd consider the addition of this card to your 99??

Hello, how are you man?
I've recently seen an amazing Dragon and I'd love to hear your thoughts about it.
Gadrak, the Crown-Scourge - basically for 5/4 Flyer (triggers Temur Ascendancy) that can block and it's drawback with Smothering Tithe or artifact ramp on the field won't be a problem. My thought process also is - when it comes early it probably will bait out removal and later it can provide Dragon body to trigger cards like Lathliss, Dragon Queen.