+1: Chandra, the Firebrand deals 1 damage to target creature or player.

-6: Chandra, the Firebrand deals 6 damage to each of up to six target creatures and/or players.

Chandra, the Firebrand occurrence in decks from the last year

Chandra, The Firebrand
by TheBurnMaster 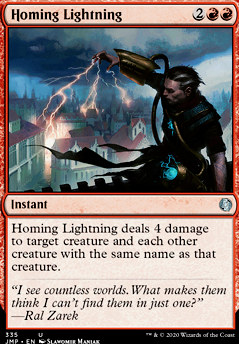 Perish With Your Sins
by MandalorianOmega

I run a Chandra spell tribal also and have had varying results. I use Chandra, the Firebrand and Reverberate though. There's a couple cards from yours that would fit nicely inside my deck. Going to have to look into which ones to sub out though.

Spook9MM on Combining effects from 2 cards ...

I really like the idea of abusing sorinâs new passive! I have some suggestions

1: Ghostly Prison and Leyline of Sanctity donât seem to be doing much. I think by turn 3 and four (when you would play ghostly prison or a topdecked leyline), you want to be playing your planeswalkers instead. I would go for early interaction instead, like Fatal Push and Path to Exile . I like the Kaya enchantment though.

2: I think you have better choices for Ob Nixilis Reignited and Chandra, the Firebrand . Especially nixilis. Heâs kinda bad.

All of the following could be put in instead of nixilis or Chandra. He first few are kind of fringe choices that may or may not be good.

1: Angrath, Minotaur Pirate with lifelink would be insane, but he is a little spendy.

2: Chandra, Flamecaller âs -X ability would also be crazy with lifelink, but she runs into the same problem than angrath does.

3: Chandra, Acolyte of Flame would just be there to buff up your red walkers

4: Gideon of the Trials could be a good defensive card, and he would he lifelink from sorin when he turns into a creature.

5: Jaya, Venerated Firemage would be an absolute bomb with sorin on the field.

6: Ob Nixilis, the Hate-Twisted would be a better choice if you want at least one nixilis, since he synergizes with sorinâs passive

I personally have seen Temple of the False God do more harm than good. Burnished Hart and Chandra, the Firebrand will definitely be added soon.

Hey! You told me to check out your Wort deck on Facebook, it looks pretty good and I have some suggestions

Chandra, the Firebrand is great in this deck early or late game because it allows you to copy spells, for instance I was mana screwed so I used her minus two to copy Manamorphose (another amazing addition if you're willing to go get one) and used it to cast Wort and copied a Harrow the next turn.

Also, spells like the mentioned Harrow with additional costs, when you copy them you don't need to pay the additional costs so if you copy Harrow you pay 3 and sac a land to find four untapped basics. Crop Rotation has a similar effect.

Dragonlair Spider for token benefit when an opponent casts spells, maybe Omnath, Locus of Rage to get some benefit from the land ramp that always happens, Boundless Realms to search for basically all of your basics most of the time, Regrowth for recursion, Revel of the Fallen God is an amazing addition for tokens, Krenko, Mob Boss is amazing and tends to draw out some removal once you get it going

Path of Ancestry will fit really well with this deck. highly recommend finding a spot for it. personally, not a big fan of Forgestoker Dragon in this deck, the rest of what you have looks great, though.

seeing as you already have the etb idea with Conjurer's Closet, why not Kiki-Jiki, Mirror Breaker? could also get away with some combat triggers. get's in the way of all your board wipes though.

also, not a fan of Chandra, the Firebrand. but that's just me

My favorite magic moment is being hit down to 1 lp by white aggro in the 5th round of standard fnm. I was 4-0 already with my grixis control brew. I had Chandra, the Firebrand in play which my opponent had ignored. I untapped and top decked a Sorin's Vengeance so I used Chandra's spell copy ability to deal 20 damage to my opponent and gain 20 life, winning instantly. My opponent was furious and began cussing me out and threw his deck against the wall. He was the textbook definition of a try hard. He called my deck a pile of $hit and told me I was terrible at magic. He was later banned from the shop by the owner for inappropriate and violent behavior.

At the beginning of your precombat mainphase if your life total is exactly 1, Swing4Lethal deals 20 damage to target player and you gain 20 life.