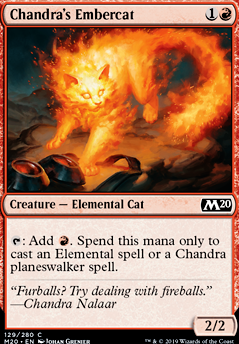 : Gain . SPend this mana only to cast an Elemental spell or a Chandra planeswalker spell. 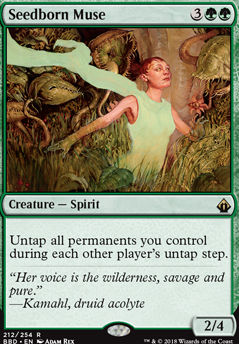 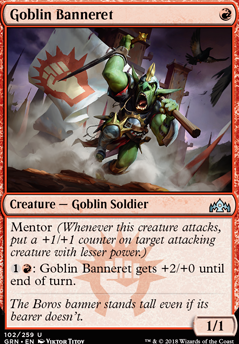 SpaceSpiff20, while I get where you are coming from with splashing black and white for better removal options, I just think it would impact my mana too much by going 5 colour. The deck already has issues with being manascrewed so I think I will just keep it at three for now. I am looking to get some of the cards you mentioned, so thank you for those suggestions. I'll put in Smokebraider s for the Chandra's Embercat s, Incandescent Soulstoke s for a Shock and a Leafkin Druid , Nova Chaser for something I'm not sure, and some Unclaimed Territory s for some of the taplands.

kamarupa I like some of the removal options you have suggested and will look at trying to get my hands on some of them. I think that Fog could be especially powerful in this deck because my local playgroup is dominated by mostly aggro and ramp decks with high power creatures. The bounce spells could also be very good because I can also use them on my own creatures to get ETB triggers again.

Thanks for the input so far well see how it plays.

Second, I have no doubt that Infuriate will sometimes win you a game. More often than not, however, it will be a dead draw. If you're behind, it doesn't get you back into the game. It is not playable when you don't have a creature out. If you have it in hand and draw a creature, it doesn't give that creature haste. It doesn't deal damage to pump the Spitfires, and it doesn't kill blockers to let your Spitfires through, either of which would be much stronger.

Third, Chandra's Embercat is fine. Icon of Ancestry is fine. But you're looking at this from a "what's the best case scenario" perspective, instead of a "what's a likely scenario" or "what's the worst case scenario" perspective. Sure, draw the Cat on turn two, play it, have it survive the next three turns while making your land drops every time and not dying, and it'll ramp out your Chandra, Awakened Inferno . What's far more likely is that you'll play it on turn two, and it'll get zapped by removal, sweepers, or be killed in combat. The best case is that it gets you Chandra one turn earlier - the worst case is that it does nothing for you. Meanwhile, beefing up your removal suit with some Lava Coil s or Chandra's Triumph s etc would be more effective at making sure you survive the extra turn necessary to play the Chandra on curve.

Icon's in a similar boat - the most likely scenario is that you take a turn off from casting more creatures or removing your opponent's threats to deploy an artifact that gives whatever creatures you already have (again, assuming they've all lived) and small boost. The worst case is that you draw it when the control player's just killed all your creatures, and you get to spend a turn playing it, a turn activating it, and a turn deploying the creature you find, while the control player gets two-three turns of no pressure to close out the game.

Icon of Ancestry also boosts creatures like Chandra's Embercat forcing a coil and higher drop destruction/counter/removal etc. having multiple ancestries in play. The deck is still fast and workable without them, but they really get a nice ramp going fairly quick when one or two drop early. Thunderkin Awakener lets me throw creatures out of the graveyard which gains haste and +1 effects from Icon of Ancestry . Cats also play out Chandra walkers and moves Chandra, Awakened Inferno out much earlier, most people are most concerned with the Shock trigger on Chandra's Spitfire which is easily ramped again for 1 red mana giving you a flying 7/4 for 2 mana and with 2 icons out a 9/6 for two red. More of a concern than the 4/4 cat which pops out a plains walker for you earlier than expected.

Add in some Chandra, Acolyte of Flame to synergize with your elemental subtheme and to buff the other walkers, and up the count of 4-mana chandra's while you're at it. I'd drop the Infuriate s and probably also the Chandra's Embercat s, since neither are particularly strong.