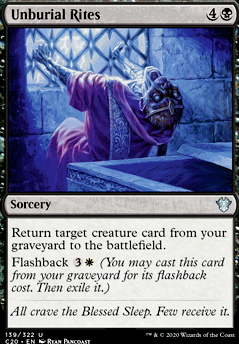 Unburial Rites occurrence in decks from the last year

Aided by the Dead
by evncrbch

Making tron decks plan A. vulnerable to GY hate is the last thing tron needs. Casting your threats that were supposed to be reanimated sounds appealing at first, but often those threats are worse than trons regular T3 plays and harder to set up.

I like the idea of gifts, but with the deck warping presence of Gifts you would need to choose a deck that wasn't already overfull on slots.

Reainimator tradditionally hasn't been very powerful in modern, mostly due to the lack of decent reinimation spells and the efficincy of GY hate.

Goryos vengence is unarguably the best Reainimation spell in modern, none of the others come close unless you want the reainimation for a different purpose than closing the game out quick. Gifts decks have often adopted Unburial Rites for a unconditional reainimation, but these decks have never really been in the forefront of modern or seen much success outside of other formats. I doubt adding tron lands would change much.

Oh snap. Thanks for your ideas!! You're right about Animate Dead. I thought that was in here. That's fixed. And I like Nezumi Graverobber-it's a mana sink and the flip would work pretty well in my meta. (The graveyard shenanigans are intense). I love Emeria, The Sky Ruin but I've played it in a bunch of decks and never been able to hit that Plains sweet spot so I ended up taking it out. After play testing I'll probably fool around with the mana base again.

For recurring Lurrus there's Apprentice Necromancer, Eternal Taskmaster the Nezumi Graverobber (if he's flipped and thank you! he's doing double duty already), Phyrexian Reclamation and then I added in Omen of the Dead and Unburial Rites. I like those over some of the other reanimate spells because Omen of the Dead is recurrable and Unburial Rites you can cast twice. But I do have an Unearth floating around I can work in after some play testing.

Iâm not so much specifically looking to dump my library in the graveyard (I already do that in my deck Centre for Disease Control.) I do see the upside to trying to make room for Dread Return and even Unburial Rites though. Hmm...

Honestly the goal was to cycle lots of cards through my hand, hopefully making the most of Psychic Corrosion, stalling the game and slogging away with zombies. Astral Drift/Astral Slide are just to help stall and to flicker a few of my mill/discard creatures.