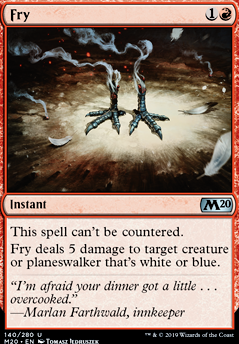 Playing Blue? This Deck Will Make You Cry
by VorelNailo 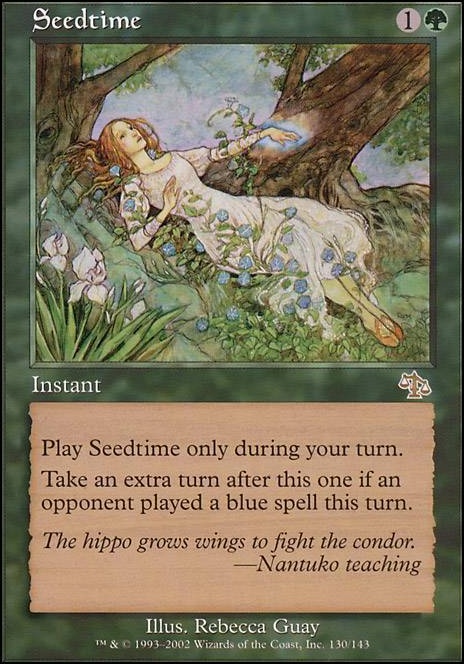 Deck looks very nice and diversified, seems like a lot of fun to play.

I'm just curious though, when would you bother siding in Ugin, the Ineffable, Kiora Bests the Sea God or Terror of the Peaks? They seem like good cards overall but I'm not sure what they would counter-play in a sideboard.

I would probably just put more counterspells and specific hate cards like Aether Gust, Fry or even Grafdigger's Cage.

Did you consider using The Great Henge?

I'd add a sideboard to the list, (to fight against other decks,) and take out the Savai Triome. The Savai Triome slows the deck down and white isn't really needed because your only white card is hybrid. (Talking about Lurrus of the Dream-Den.)

So Iâve been checking out more lists like this and I think a good sideboard could look something like this: 2x Fry 1x Kalitas, Traitor of Ghet 3x Leyline of the Void 3x Pithing Needle 1x Golden Demise 1x To the Slaughter 3x Kolaghan's Command 1x March of the Drowned I also like how you had Collective Brutality but I just couldnât find a place for it. I dunno- it might be really good, but either way itâs out of my budget range lol.

I have a couple suggestions- but these are mainly for the current meta, not a game store or an LGS where different decks might be better.

I would remove the Unclaimed Territorys because you need colored mana early game for both pushes and seizes.

I would put in a couple Mutavault just because it is a great card in tribal decks and sweeper protection. The downside of it producing neither red nor black can be mitigated by playing more urborgs, which brings me to the next point.

Probably 3 or 4 Urborg, Tomb of Yawgmoth. It by itself is a swamp, and the downside of it being legendary is not a huge deal if you only play 3 anyway. This is also necessary when playing with Mutavault

I would recommend taking out Rigging Runner entirely for more Metallic Mimic s, because while playing rigging runner or t2 after a swing is unlikely(but Iâm not mathematician) because you only play 4 other one drops.

Instead of Rending Volley, Fry would be better because it can also hit walkers. Take out rending volley

Leyline of the Void would also help out in lots of matches like soultai delirium and lotus breach. Take out the glint horns

Pithing Needle almost a strictly better Phyrexian Revoker because it gets hit by less removal. Take out the revokers

Also- although you would have to take out some of the best cards in your deck, Lurrus of the Dream-Den could really help out against removal and sweepers.

I am a dedicated Control player, and I was intrigued by seeing someone else also going Jeskai.

-I would not run Kykar, because it distracts from what you're trying to do.

-First suggestion would be to go up to 4 Teferi, Time Raveler. You need 4 in almost any control list running the colours.

-Remove the 4 Yidaro, and replace it with 1 more Dream Trawler, 2 Omen of the Sea, and 1 more card that becomes more relevant when you test the deck more. This spot will likely be taken by removal or counterspells such as Absorb or Banishing Light.

-As I mentioned above, Absorb is a really good card. I think that Neutralize has it's perks since you can cycle it if you don't need it, but I personally think that the life gain will be crucial in the matchups against the incoming creature-based decks.

-I really like Shark Typhoon! It reminds me of when I played Metallurgic Summonings in standard, but with a cycle possibility. This being said, I would only run 1. I would recommend replacing the second one with a third Elspeth Conquers Death. Not only does this card have removal when it hits the board, but you can bounce it to your hand with your own teferi, draw a card, and proceed to remove another permanent.

-I know that having red in the deck makes you want to inherently run more red cards, but I would say only use it to compliment the parts of your deck that have holes. I would replace Scorching Dragonfire with Banishing Light. This will help with more things that you'll end up facing.

-I mentioned using red to compliment your deck. I might recommend adding The Royal Scions in place of Boon of the Wish-Giver. It will add more consistent card draw earlier in the game, as well as a secondary win condition if you ult them. People tend to forget about this card if Teferi's on the board, so you can get free ults off quite often.

-I might consider Essence Scatter for the mainboard or the sideboard due to the mass in creature decks we're about to see.

-I run Fry in the sideboard due to my meta at my store being control and Azorius Flyers.

I hope this helped! Let me know if you have any more questions about deckbuilding or the recommendations I made!

Fry has the art you might have been thinking of. Looking at it now, it really does look like an un card especially with the flavor text