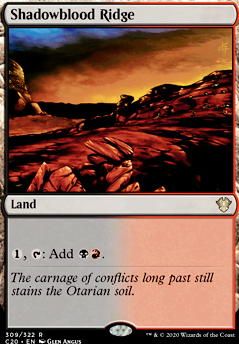 Shadowblood Ridge occurrence in decks from the last year

Risumu Shadowblood Ridge was left out simply because of its restriction. We already run an extremely low amount of lands so we could cut any unnecessary lands from the list.

Wow thanks for the feedback Eemiller622, Iâm still testing the deck and still haven't put in the proper deck description. I was surprised when I saw the different deck lists with so few lands but I am super unlucky (even with the new mulligan) with my first hands and will not start a game without enough mana to ensure Anje Falkenrath turn 3 or less. I will put in Blackcleave Cliffs and remove Shadowblood Ridge . Ideally I would put Mox Diamond , Lion's Eye Diamond and Mana Crypt but they are financially not reasonable. Thanks a lot for the Tainted Pact info I did not realize I should not have any basic land duplicates.

I forgot to mention Shadowblood Ridge if your vampires have BR in their costs. To keep synergy, Manic Vandal could go out for some more vampires or a Painful Truths . Some of the advantages of playing Vampires is that many of them are really cheap to acquire.

Filter lands ETB untapped and that's what you want the majority of the lands in the manabase to do. Can get all the Filter lands for Mardu for $20...

Fetid is the most expensive at $8. Getting all these for $20 is worth it. However could also get all the $1-$3 lands in my last comment for about $22. That's 14 dual lands compared to four Filter lands for about the same price. Getting 14 lands makes more sense to get first to make sure you have lots of dual lands in the overall manabase.

In fact you could get the entire amount of the lands (20 different ones) that I'm suggesting for about $50. Add the Check lands and Fetch land you already have, 12-15x basic lands and that could be your manabase. That's overall cheap for a playable three color manabase in Commander. Of course It can be improved, but as a starting out playable manabase that's a good price.

You'll also want to include mana rocks (Talismans and Signets) which can help the manabase with color fixing.