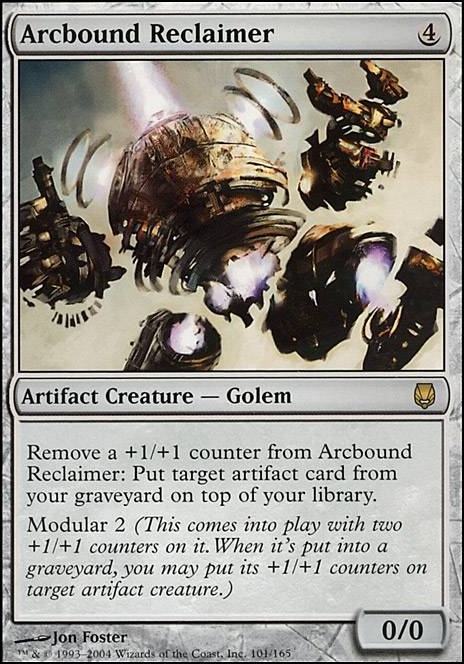 Remove a +1/+1 counter from Arcbound Reclaimer: Put target artifact card from your graveyard on top of your library. 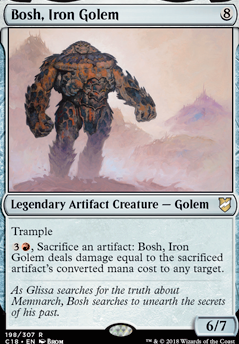 Rocks and Stones
by Quackenbush 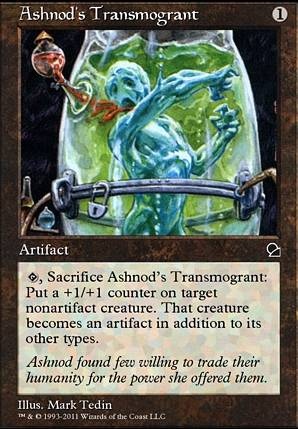 X Gon Give It To Ya (Xiahou-Dun cEDH Primer)

Profet93 I am newly active again. I have been trying to brush off my MtG rust and get back into the game. I appreciate suggestions a lot and will be editing the deck a little more pretty soon. Sometimes I would play Possessed Portal against decks like Jace, Vryn's Prodigy  Flip to prevent milling or to prevent frantic searches. Beacon of Unrest is definitely a good replacement for Arcbound Reclaimer. I will play test it for a bit and see how it goes over. Thank you for your help I appreciate it, but it might be a little while before I revisit this deck with the seriousness I did before.

Artifact Spells you control cost less for each +1/+1 counter on ~.

Remove 2 +1/+1 counters from ~: return target artifact from your graveyard to your hand.

I'd run it. reminicent of both Arcbound Reclaimer and Jhoira's Familiar without being a strictly better version of either.

SamsWrath, I think you are missing part of the point of this deck. The more noncreature cards we throw in the deck, the more chance we have of wasting two mana. This deck wants to minimize those chances in every way possible by ensuring any sorcery or instant it runs can be recurred from the graveyard by itself (thus we run Dread Return ). If we throw in Corpse Dance , Yawgmoth's Will and Demonic Tutor , then we're just asking for some dead flips that don't immediately impact the board. So I typically pass on any noncreature card unless it's an immensely powerful artifact (because it can be recurred through several of our creatures) or it can cast itself from the graveyard (flashback, retrace, etc.).

As for Priest of Gix , he was removed as of the most recent build for Emrakul's Hatcher who is much more versatile. Cathodion doesn't in and of himself provide the mana for more flips and requires a sac outlet (which we typically get through flips), so he seems a little slow to me. I either want creatures to have immediate impact once they hit or provide immense value for a delayed payoff; anything that doesn't meet either of these criteria is cut. As for Su-Chi , he's 4 power and I have a whole section in the primer detailing the importance of Grenzo being at X=1 (flip creatures of power 3 and below).

Arcbound Reclaimer , however, has been on my radar for a while. I'm not a huge fan of putting the important piece to the top of our deck and potentially delaying when we can play it, but overall it could be worth it. I'll add it to the Maybeboard and will do some testing with it.

Perhaps running Arcbound Reclaimer could be good? We have quite a few very important artifacts, and it's reusable recursion. Eot throw lantern, heartstone or similar on top, to draw next turn? And also be a body to sac.

The wincons are stronger, the mana curve is lower (and more balanced), the cabal-tron package is now super-redundant (with Cabal Coffers , Nykthos, Shrine to Nyx Urborg, Tomb of Yawgmoth , Vesuva , Deserted Temple , Petrified Field , Cabal Stronghold , and Expedition Map ), the stax effects are stronger, and the utility spells are cheaper. I'd say the deck has gotten at least 12% better, which, admittedly, goes against what I said ealier about the deck being almost perfect (though, in my defense, I hadn't yet taken a good look at some of the cards they've been printing recently--that's the great thing about Shirei, he only gets better the more worthless black commons they release).

Also, I still stand by Damnation --especially now that I'm playing Midnight Reaper and Dusk Legion Zealot , my life total is kind of a precious resource--sure, toxic deluge might be worth it anyhow, but it also kills my commander (read: I get my board state back after a damnation), so it's not strictly worse--though, I might consider playing deluge over Oblivion Stone , even though that card is my one way of dealing with problem enchantments, for instance.

Oh, and, I considered adding Pitiless Plunderer , but, again, the list is really tight, and I'd rather have Black Market over him, as I don't need more than one color of mana, the mana from Black Market accumulates, and it triggers whenever anything dies (relevant with Grave Pact ).

There are probably still better Shirei decks out there that still wouldn't qualify him for tier 3, but, frankly, even given a casual glance, tier 3 could easily be split up into multiple tiers (or just not have so many commanders crammed in it, and maybe we add a new bottom tier). I mean, Ghost Council of Orzhova and Ambassador Laquatus probably shouldn't be in the same category as Aminatou, the Fateshifter and Oloro, Ageless Ascetic , for instance. All the same, just in case these somehow weren't already obvious, let me detail a few of the more interesting interactions Shirei has with some of the dorks in this deck:

Mesmeric Fiend has an O-ring trick going on where, if we sacrifice him before his first ability resolves, the second ability triggers and does nothing, then we exile a card from our opponent's hand permanently. Doing that every turn with a sac outlet can be pretty good, and if you do it for long enough, you'll have everyone topdecking. I used to play Brain Maggot in this vein, but later learned that that works differently--it's all wrapped up into one ability, so if he dies before it resolves, during resolution, we take a card, the game sees that it's dead, then we immediately return it to their hand. Not very good, obviously.

Coffin Queen has a slightly different but effectively equivalent O-ring trick--if she's sacrificed before her ability resolves, the ability resolves, but since she's dead, the game doesn't remember her as an object and the delayed trigger of the ability can never happen, so we keep the creature permanently. When Coffin Queen comes back, she is, of course, a new object with a different timestamp.

Oh, and, in case this one wasn't obvious, cards like Mindless Automaton work with Shirei because their power is 1 or less when they enter the graveyard, thus triggering Shirei's ability, and their power doesn't become more than 1 until they've already entered the battlefield, as per layering rules.

Seal of Removal (or just any bounce target, just so they have to pay the ridiculous tax again)

Cool deck idea! I'm running Ghalta as a Commander but instead am playing Mono-Green Dredge. I'm relying on undercosted graveyard matters creatures such as Ghoultree and Splinterfright.

Back to your deck, I'd love to see a Steel Overseer in here. A lot of your artifact creatures are small utility creatures (Myr Retriever, Chief of the Foundry, Junk Diver, etc.) and Steel Overseer would help them grow to keep Ghalta cheap. Verdurous Gearhulk is 8 power for 5 mana with 4 of that power spread across your creatures however you want and is an artifact. These +1/+1 counters work well with Arcbound Reclaimer and Hangarback Walker as well.

Prophetic Prism and Terrarion could both be swapped, in my opinion. Mycosynth Wellspring generates card advantage once it's been sacrificed and helps find Forests which seems important given your very low land count. Smuggler's Copter provides card quality and not card advantage, but seems at least worth consideration.