Put target creature card from a graveyard onto the battlefield under your control. You lose life equal to its converted mana cost.

Bring him down Kelsien
by Vasin 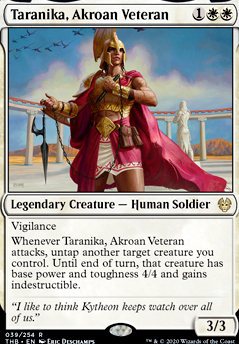 As much as I like the idea -and I really do like the idea, maybe for some casual fun?- Reanimate isn't Modern Legal. The Unearth is definitely the weakest card in the 60 so far I think. Not sure what slots in as a decent replacement.

This looks really solid overall. A thought; maybe replace Unearth with Reanimate? Same cmc, both are sorcery speed plays, but Reanimate might help nudge your life total down toward lethal Death's Shadow levels more so than Unearth. Then again, it might backfire, so itâs worth weighing.

a gift is a gift

Title made me laugh. But what happens when Zedruu is tragically slain? You have but one Reanimate! How will our heroine recover? And how will you deal with actually having to keep your sweet gifts on your side of the table?

Okay so heâs not a fatty per se but heâs sweet lmao. Stuff like Sheoldred, Whispering One Rune-Scarred Demon Luminate Primordial and then the general suite of board wipes (youâre in black and white youâve got them all), a fair set of Counterspell s, and the entire Reanimate package.