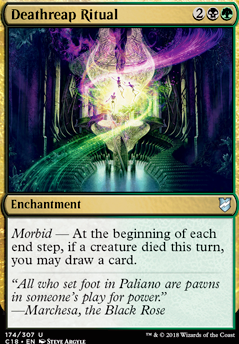 Morbid â At the beginning of each end step, if a creature died this turn, you may draw a card.

Deathreap Ritual occurrence in decks from the last year 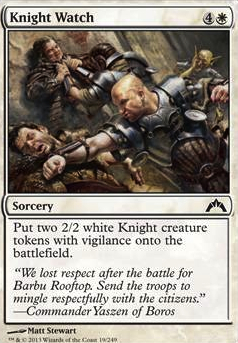 Polly Want A Cadaver
by rellik375

Growing Ranks and Deathreap Ritual are the only two that came to mind, both are really slow going, ranks essentially reads "get a 1/1 on upkeep if you have a 1/1 token already" it's really only cool if you're populating Grove of the Guardian or Desolation Twin tokens (which are both terrible, but could be fun options for the deck.). deathreap is going to be a worse Phyrexian Arena in most cases, if you do have the board to make it better than arena you're probably winning anyway and the potentially 3 more cards wouldn't matter.

So those would be my suggestions for cuts, I'm unsure about where you want the power level of the deck to be so I'm playing it safe on guessing you're aim might be a low 50% level for my suggestions (a cedh level ghave looks vastly different from what one would first see him playing out). I have built Ghave twice, Tokens and Counters Everywhere, when he first came out following the Doubling Season token bonanza strategy, then I revised it with Aghave, tequila token party recently because the first I felt got way to bloated (I'm still making changes here and there for it).

Another random suggestion Spore Frog (reprinted in modern horizons so is cheap) likely would be a just better Kami of False Hope , it fits your mana base better and fit's ghave flavor better. I admit to just clicking the suggestion boxes for the random reference cards, but they are unlikely going to be good to play.

The Golgari Signet and Selesnya Signet would probably upgrade the cluestones.

Fecundity in most cases is just an upgraded Deathreap Ritual

Good-Fortune Unicorn is pretty sweet as a cheaper type of effect as Juniper Order Ranger .

more persist creatures like Lesser Masticore can help fuel your strategy when you have some ways to reset the persist counter.

I think Fecundity the yet-to-be released Moldervine Reclamation are better draw effects than Deathreap Ritual . With deathreap you get a max of one draw per every turn, but with the others you get as many as you sacrifice. so if you sac all your tokens with Prossh at once, you'll get to draw a lot more and a lot faster.

Hey, saw your forum topic asking for help. enigmadox gave you great advice; I'll expand on it some.

Four drop Meren can benefit from early game ramp to be able to possibly play her turn three. Budget mana dorks can be ramp in the early game or sac fodder in the mid/later game to get experience counters.

If you like some of these suggestions I offer advice on cuts to make. Good luck with your deck.