Anointed Procession occurrence in decks from the last year 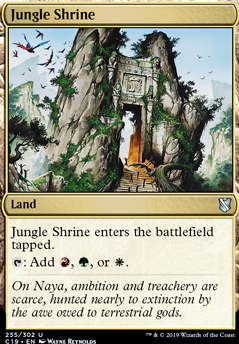 When The Violence Causes Silence
by mindfulvet

I believe for Kykar + Ruby Medallion + Sluggishness to produce infinite mana you would also need something like Spark Double, Illusionist's Bracers, or Anointed Procession, right?

Thanks a lot for your kind words and advice.

We love Anointed Procession but in this deck there are just too few token producers (none of which is our commander) to make it worth our while. A more token-oriented Odric would have a blast with it though. This is also the reason why we'd rather not use Skullclamp. We're not generating enough tokens to just kill off a few in order to draw some cards. Also, three of our token generators cost mana to activate, which makes the whole process of using SC too inefficient (in our book).

Sword of Fire and Ice is great for the card-draw but it happens to be the one sword we do not own. We're not ready atm to invest 80 euros to get one. With all the lifelink in the deck, we think Well of Lost Dreams is worth including but we are going to sideboard it for now. We will probably make an occasional swap with something like Banishing Light or Oblivion Ring when we feel like a little less control wouldn't hurt, and see how it does.

Thanks again for your help!

Wow! This deck looks like it's a blast to play. Odric's ability looks like such a fun build around. The Primer was expertly done, I can tell there was a lot of work put into it, and it turned out great!

Looking through the list, I wonder if Anointed Procession would have enough incidental value to fit with the token producers in the list, could be a quick way to rebuild after a board wipe.

Also maybe Sword of Fire and Ice, Well of Lost Dreams or maybe even Skullclamp over something like Gift of Estates for card draw.

If you're feeling spendy, you could add Doubling Season, Anointed Procession, Parallel Lives, or if you feel like helping everyone out, Primal Vigor.

The other thing you might want is more cheap disruption against your opponents, so you have ways to interact with their shenanigans without setting yourself behind. Cards like Nature's Claim, Swords to Plowshares, and Path to Exile are staples that'll let you cast something on your turn and have a single mana up to respond to someone trying to combo out or kill you. Just be sure to tap your mana appropriately.

To protect yourself against being disrupted, you could add cards like Rhythm of the Wild, Veil of Summer, Teferi's Protection, and Boros Charm.

With many creature tokens ("going wide", or a lot of creatures), you might also want to "go tall", meaning make them bigger. Cards like Cathars' Crusade and Juniper Order Ranger help boost your creatures as they enter the battlefield.

Lastly, since you're combat oriented, cards like Champion of Lambholt, Craterhoof Behemoth, End-Raze Forerunners, or Pathbreaker Ibex will help you break through or bypass your opponents' defenses for the win.

ShutUpMokuba on How can I improve my ...

I would add more pillow-fort stile enchantments like Ghostly Prison, Norn's Annex, Lightmine Field, Karmic Justice, Sphere of Safety and Crawlspace. In the creatures compartment i would suggest adding Master of Cruelties. For a less competitive build (but actually fun to play) i play in my deck the "curses" like Curse of Opulence. Anointed Procession is a must in this deck since it allows you to get two assasins instead of one when you are not the monarch. It really depends on what you are aiming for but in my opinion the deck doesn't have enough pillow-fort cards to play the political game.