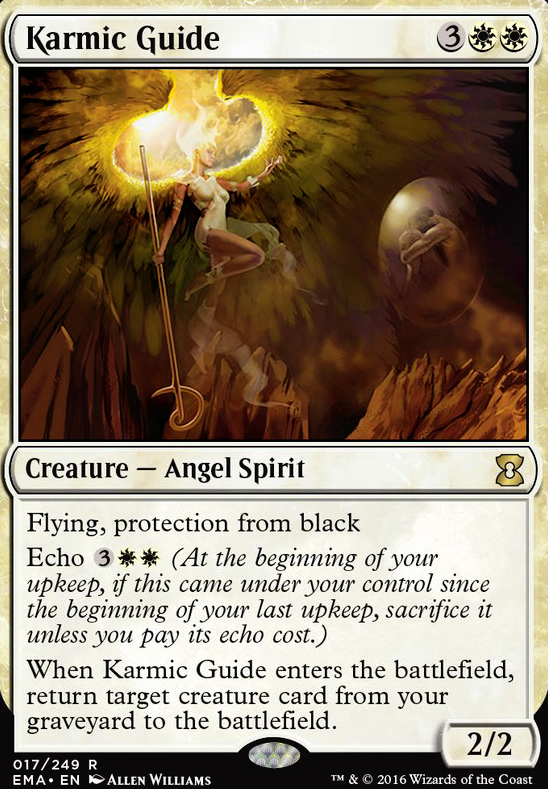 Karmic Guide occurrence in decks from the last year

Alesha, Who Smiles at Death
by zegrim

One Stop Alesha Shop!
by xSKINCOLLECTORx

With regards to sac outlets, I actually made the decision a while ago to cut the number of outlets down in my list, in place of more card advantage and honestly I can say that I have found it to be better. There are 4 main sac outlets that I focus on, Blasting Station, Altar of Dementia, Ashnod's Altar and Phyrexian Altar. I also sport Starved Rusalka and Greater Good (which is insane btw with the release of Renegade Rallier), however that's really all the repeatable outlets I run.

The reasoning I found was that while you can run a bunch of sac outlets, ultimately you can create lots of combinations that don't do anything. For example, Saffi Eriksdotter + Karmic Guide + Fanatical Devotion, while being an infinite combo, doesn't actually achieve anything for the deck. And while you can add Soul of the Harvest for card draw, you now need 4 cards to generate value and even still can potentially not have the mana required to do anything as a follow up.

I appreciate that adding the Boonweaver Giant combo into the deck kind of skews the number of sacrifice outlets you want to run in the deck. That being said, generally if you're going to run the boonweaver combo then that should be the central focus of the deck, with the rest of the list leaning into supporting the combo. So cards like Idyllic Tutor are going to make the deck a lost stronger as you want more options to get a sac outlet and then get either boonwevaer or pattern down and then go from there. For me personally, I elected not to try and integrate this as a combo since I felt that it was strongest with the addition of black for the creature based support that is offered there. But again, I still think the general premise of "less situational sac outlets, more tutors/draw" will ultiamtely be beneficial for the deck.

As for the swaps you've suggested, I think that they seem decent, I personally would have gone for more draw over Caregiver but at the end of the day you need to build a list that's comfortable for your playstyle.

If you hit Karmic Guide before Loaming Shaman, you'd only be able to do one loop, whereas Ulamog is a single card that does it 100% of the time.

You seem to have a pretty decent deck built for your budget.

You might want a few more board wipes for aggro decks or go-wide decks. Fumigate, Phyrexian Rebirth and Martial Coup are all pretty budget and will also gain you some life or leave behind a token.

Karmic Guide and Reveillark are good ways to get stuff back from your graveyard and are both relatively inexpensive.

mattr2013 Yes I do want that. I was unaware of this chain and I love it. I can cut Resto for Gaurdian, and I think that while a neat trick, Nightshade Peddler just isn't quite good enough anymore, so Karmic Guide can go there. Thank you for that idea.