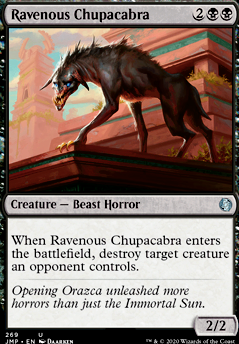 There is a great 1 card re-animator engine in Journey to Eternity Â Flip. You cast in on something you will sacrifice or going to lose. Preferably something that nets you an effect when it ETBs. The deck I run them in has stuff like Ravenous Chupacabra and Shriekmaw so they yield double, triple, and even more kills for the deck.

As an enchant, it will get you back the creature enbchanted when it dies. Then as a land, It is a repeatable reanimator engine. It can also tap for mana of any color.

Solemn Simulacrum and Filigree Familiar get you an ETB and a death trigger. You don't necessarily need to find death triggers (not a ton of those but they exist) but it is generally better to find things with good ETB then sac them for effect.

Such as Ravenous Chupacabra and sack it to Viscera Seer for the scry (or your commander for the counter).

Any deck playing Desecration Demon or Midnight Oil is going to get a thumbs up from me. I love the premise, it looks like it has potential! I would suggest cutting some of the top end of your curve and finding some cheaper creatures or removal to play instead, though. Replace the Gearhulks with Ravenous Chupacabra and then you'll have another four drop you can curve into Gray Merchant, for example.