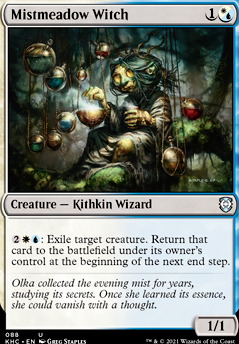 Sram and 5 lions
by Averagejoe013

GrimlockVIII on Strict Proctor and the Hunted â¦

Was kinda thinking the same thing. Not sure how many good negative ETBs are out there for Green though. Forcing Heroic Intervention in there might be pushing the color balance when cards like Lazotep Plating and Rebuff the Wicked already exist.

A classic. I like Misdirection and Rebuff the Wicked in my competitive zur list. But if you like funny zur decks in general, I just built See what's possible with the new Zurface Pro which is a very casual take on zur that you might find interesting.

i honestly love it lol.... maybe Brave the Elements / Rebuff the Wicked could be some tech to consider for protecting your enchantments of tokens/evasion.

Nice build, but for Vintage you'll want 3 or 4 Rebuff the Wicked at the very least for some protection. Maybe you meant 'Casual' format if you just mean leisure tabletop games, but a build without at least some means of control will get destroyed in a legitimate Vintage match.

Nevertheless, +1 for good synergy, just give either the deck construction or that selected format a second look.

I like this build as it uses a lot of my favorite white creatures like Kytheon and Stoneforge Mystic, but I feel like Sejiri Shelter Â Flip is kind of lackluster here. I think there are much stronger options for these deck slots in Modern - For Instance:

Emerge Unscathed or Gods Willing, both of which offer a better benefit for less mana, or even Alseid of Life's Bounty if you like the creature route (bonus Lifelink is never bad either).

That, or you could drop in something like Rebuff the Wicked which is pretty much a "must-include" in all of my White builds. Very few decks see a Counterspell coming from Mono-White, so I find these to be quite dependable. The fact that it can target any permanent is especially nice, since artifact hate can be quite annoying against an early-play Aether Vial, for example...being able to save more than just Creatures can be quite a boon indeed.

I don't think that the flip side of Serjiri (the tapped Land) is really crucial here for your deck, since your current Land ratio looks fine without it, and you're not running any type of Landfall which might make playing a land a more desirable mid to late-game play.

Nevertheless, I like the build in principle so +1 for that!

Thanks Apollo_Paladin. I haven't really playtested this build but I also think Rebuff the Wicked would be a nice addition. Not sure to mainboard it tho. I'm still focusing on my own gameplay, rather than countering people's deck.