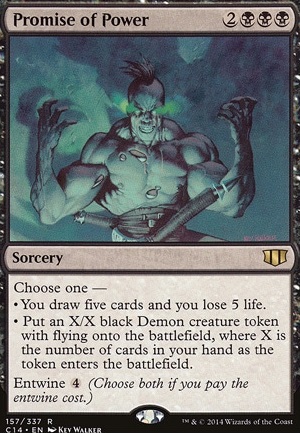 Choose one - You draw five cards and you lose 5 life; or put a black Demon creature token with flying into play with power and toughness each equal to the number of cards in your hand as the token enters the battlefield. 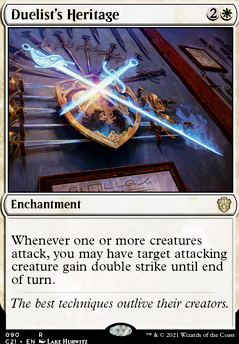 GreenHamma I used to run Final Parting but i replaced it with Burning-Rune Demon becausue same thing but a creature too for only 1 mana, also 5 mana tutor for 2 aint the best thing in the game.I actully wanted to try Peer into the Abyss cause discarding whatever creature i want and then reanimate them next turn kinda good ngl, i might replace Promise of Power with it. And i rly dont like Skirge Familiar cause i only need to discard 1 or 2 cards sometimes. Thank you for the suggestions and the ideas tho.

griffstick on How do you create card-draw â¦

Card draw is definitely not hard to come by in black. 2 budget options Underworld Connections and Promise of Power

Could use some card draw elements in place of some weaker creatures. Promise of Power ? Ancient Craving ? Syphon Mind .

Could definitely use some single creature protection because your CMDR is gonna take heat for a multitude of reason. I like Cloudshift or Restoration Angel . Those are very synergetic with your cmdr as well as some creatures.

Also think you should weigh the value of some of your treasure token generators and perhaps replace for sac creatures. Demon's Disciple .

Whip of Erebos is tiiiiiight yo..

Sweet deck!!
Idk if you have thought about Promise of Power

griffstick on Greed or Erebos, God of â¦

Greed is 4 mana to cast, 1 to activate. So 5 mana for 1 card, 9 mana for 5 cards. Erebos is worse at this. I think Erebos is better card then greed. Because of all that comes with her, but I think Promise of Power is better than both at drawing cards