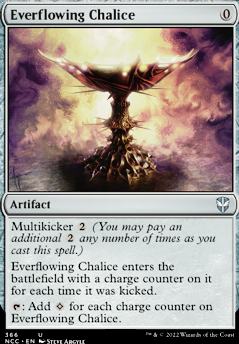 This enters the battlefield with a charge counter on this artifact for each time this was kicked.

: Add for each charge counter on this.

Hey Balaam__,i reasoned a bit,i had a "ramp" idea: Everflowing Chalice. You play this card at turn two,with proliferate got another counters and more mana with play Azor's Elocutors one turn earlier. Or with a lot of mana you can play everything else much faster. What do you think about it?

Surprised Everflowing Chalice is not in here. Thought it would be some good ramp. Maybe even Astral Cornucopia.