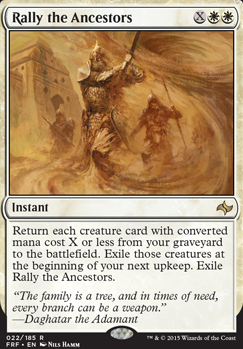 Return each creature card with converted mana cost X or less from your graveyard to the battlefield. Exile those creatures at the beginning of your next upkeep. Exile Rally the Ancestors.

Rally the Ancestors occurrence in decks from the last year 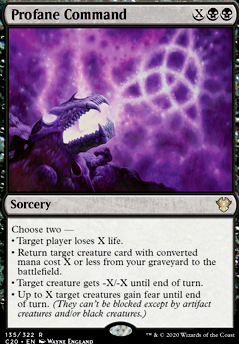 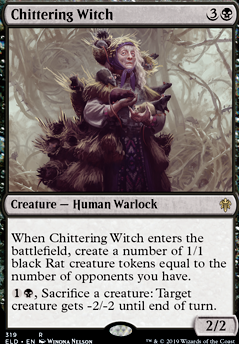 Even Dimir House Guard is interesting because it can be a free outlet or transmute into a different powerful 4 drop like Anointed Procession or Smothering Tithe.

There are a few other, "Oops, lethal" card i was looking at were Rally the Ancestors and Boros Charm. Rallying back a few creatures with a sac outlets and a payoff like Cruel Celebrant can easily lay down a lot of damage at instant speed. Instant speed double strike can get a surprise commander kill. The ability to protect your board is icing on the cake.

I really like Offspring's Revenge. Though it is probably too slow. But i mean, the kitty is cute so... playable.

Ruinous Ultimatum is pretty silly too. I think cheaper board wipes are more effective since all of your creatures dying it kind of the point.

I like the Rally the Ancestors plan a lot, but if I were you I would think about the various win conditions of the deck the other way around. Rally the Ancestors should be a secondary win condition rather than a primary one in my opinion. I would hold onto the ETB creatures to keep the "combo" kill in the deck, but then outside of that I would play a ton of lords, and rely on the fact that my creatures will end up in the graveyard by the mid-to-late game anyways. But I'm a pretty out-and-out aggro player, so maybe I'm just too impatient to set up the combo. Cool deck though, definitely a +1

Enral Thank you! Yeah, Rally the Ancestors has always been a pet card for me as well that I just love to play. I mean, c'mon, it's instant speed mass reanimation!