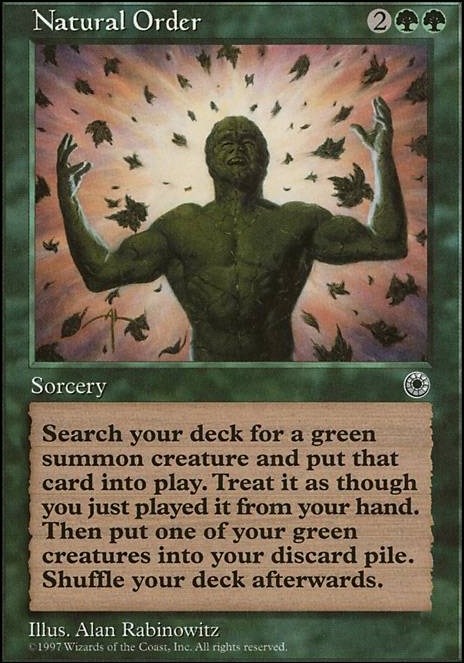 MoKuhl_EDH Elesh Norn, Grand Cenobite + Nature's Revolt does not win through combat damage. It wins by animating everyone's lands and them killing them due to the -2/-2 effect of Elesh Norn. The deck is not designed to win primarily through combat damage - it can, but it is not the goal. Same with Linvala, Keeper of Silence + Nature's Revolt , it animates everyones lands, but they can no longer tap them for mana due to Linvala's effect.

This deck is not a combat-based deck - it is a deck designed to make your opponents suffer and limit their ability to play Magic. As I said previously, the only reason Sigil of the Empty Throne and Craterhoof Behemoth are there is as a backup win-con if we are unable to land any of Elesh Norn, Linvala, or Nature's Revolt.

Lord_of_Cardboard I'm pretty sure sideboard is incldued in the cost, so ignore that. I never pay attention to the tappedout price because it's usually inaccurate and averages the price of a card based on all its printings. Don't worry about a land base, given it's very easy nowadays to budget one efficiently. In a deck based around ETB, it's very easy to budget. If there's a card that's a little pricey, like Craterhoof Behemoth, there are budget alternatives. While landing a hoof with two triggers nearly always ends the game, using a similar card like Decimator of the Provinces or End-Raze Forerunners works just fine. Even just using EDHrec and filtering the most popular cards to be cheap will give you a better idea of what other people do to budget their lists. Do what you can to ensure you have a consistent mana base, a way to ensure your mana base stays efficient with cards like Farseek or even Skyshroud Claim, a decent amount of removal (preferably in the form of ETB from cards like Reclamation Sage and Ravenous Chupacabra), and having ETB effects on nearly every creature or even every permanent in your deck. In my opinion, if you were to buy a nicer card or two for this deck above the $10 range, Birds of Paradise is a must-have mana dork in a multicolor deck, and Field of the Dead will give you an insane amount of creatures with little to no effort. Keep in mind this list is based around Birthing Pod, so that card and the others like it are a bare necessity. If you want to push your list more towards blink or landfall, by all means, go crazy. This is just my iteration of a very popular and flexible commander.

enpc on Technically not infinite combos

Many times I have seen people make statements along the lines of "I don't like infinite combos" or "We don't play infinite combos in our playgroup". But then I see these same people running cards like Avenger of Zendikar + Craterhoof Behemoth.

So where do you draw the line? How do you feel about game ending combos that are technically not infinite? Are they the same or different, and why?

Blinking with the Roon

You should take Duplicant out of the maybe board and put it in the deck. Such a powerhouse of a card in Roon. I think you'd get a lot of really great value out of adding Sludge Monster as well. It doesn't exile the card, but that makes it better at dealing with commanders. You massively cripple commanders by hitting them with Sludge Monster, and because they're still alive, they can't just be recast, they've gotta be dealt with by someone first. With commander-centric decks, it stalls them out entirely for at least a few turns.

Brutalizer Exarch is another one that would be great in here. Repeatable creature tutor and battlefield control, all in one.

And you should put something like Craterhoof Behemoth in here for a finisher. The battlefield control in this is pretty good, but there doesn't seem to be a win-con aside from either attacking them for a very small amount of damage each turn or hoping your opponents scoop out of frustration. With a deck this heavy into control and battlefield manipulation, you need something to end the game relatively quickly or people won't want to play against it. Doesn't necessarily need to be craterhoof, but that's a real easy one card win-con lol.

Less necessary but a fun addition if you find the space for it at some point, Sundial of the Infinite is an easy way to permanently exile opponent creatures. Blink a creature with Roon or Mistmeadow Witch or something, then activate the Sundial, those creatures don't come back.

That is a great idea, Natural Order is really easy to cast with this deck.

But at the moment, I'm trying to decide the next card to buy. My budget is limited so I need to upgrade a card at a time when it comes to the expensive ones. I'm divided in between getting Craterhoof Behemoth, Parallel Lives, Koma, Cosmos Serpent, Rhystic Study, or Cyclonic Rift.

that_dude33 I ran it for years. Love the card, but with Craterhoof Behemoth and Finale of Devastation as backups, it's not needed.

Thanks for the suggestion though.

Since Pathbreaker Ibex only gives +3/+3 by itself, Blossoming Bogbeast only gives +2/+2, and Craterhoof Behemoth gives +1/+1, I think +5 power (even with no toughness buff) may be too high a baseline. 4 would be fine.