Search your library and/or graveyard for a creature card with converted mana cost X or less and put it onto the battlefield. If you search your library this way, shuffle it. If X is 10 or more, creatures you control get +X/+X and gain haste until end of turn.

They Put Bugs In Him
by Carys 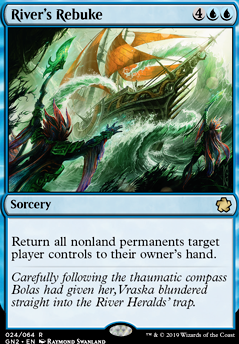 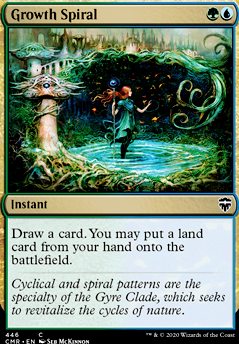 PROSSH over everything
by enrico81

Hull Breach: The same card advantage of Return to Dust and at the same speed... but for half the mana. It's a common, too. How this two-for-one superstar was ever forgotten was beyond me!

Blood Frenzy: Mono-Red is somewhat lacking in hard removal. Sure it can throw direct damage at creatures, but EDH is the world of big plays, and sometimes a fattie will come along who is simply too big to burn. Blood Frenzy can kill any attacking or blocking creature for just two mana - while coming with a free Scorching Missile! This type of card takes advantage of the multiplayer format that EDH often is: If Player A attacks Player B with a big creature, you can use Blood Frenzy to make the creature hit Player B for four more points while conveniently disposing of it right after. Whoops, you just did Doom Blade better than black could ever dream of.

Aftershock: Blood Frenzy is cheap and powerful but a little specific in what it can target. Aftershock can flat-out destroy any permanent of the three most common types with no restrictions! This kind of versatility at four mana comes with the acceptable caveat of 3 life, which is a pittance when you start with 40. If you're making a mono-red deck, the flexibility of Aftershock should make it a staple.

Repopulate: Graveyard hate for decks without access to black - and it's an instant, so you don't lose the element of surprise like if you run artifact solutions. It can also fight against milling effects if you're desperate. Don't need graveyard hate? Hey, you can just cycle it away for something else!

Kill Switch: Playing a colour that can't deal with artifacts? Crank this guy every turn and you'll shut them all down! A Blightsteel Colossus is only scary if it can move. You can even still use mana rocks and attack with artifact creatures on your turn, then activate Kill Switch afterwards to keep anyone else from having access to their own trinkets.

Duskmantle, House of Shadow: Does anyone in your playgroup run Cruel, Enlightened, Mystical, Personal, Sylvan, Vampiric or Worldly Tutor? How about Harbingers, Volrath's Stronghold or Momir Vig? It can be comforting to have an anti-tutor just sitting in play, making mana when you don't need it.

Mitotic Manipulation: Monoblue can't do mana acceleration, right? Under most circumstances, Mitotic Manipulation is three mana to put an Island into play untapped - last I checked, that's better than the ever-popular Wayfarer's Bauble. Plus, once in a while you might get to pull out a Sol Ring, Gilded Lotus or other format staple if one of your opponents already has theirs.

Coalition Honor Guard: Long before Spellskite was zooming the toys away from Boggles decks, this unassuming common was doing the same. The Honor Guard is a nightmare for any Voltron-style deck that leans heavily into auras, including the common Zur and Uril builds. It also soaks up removal that would be pointed at key cards, such as your own commander.

Warping Wail: This counterspell can be played in any colour and even has some other modes. Any EDH deck without access to blue can still run this to prevent untimely board wipes, extra turns, and plenty of game-ending cards: Debt to the Deathless, Exsanguinate, Finale of Devastation, Genesis Wave, Insurrection, Rise of the Dark Realms, Torment of Hailfire... any number of effects you never want to see your opponent resolve.

Heat Shimmer: This mundane-sounding sorcery can do some heavy lifting, particularly in a colour pie as shallow as red's. Shimmer allows you to bring the heat by copying not only the best comes-into-play trigger on the field, but also any fun triggers from attacking, dealing damage, and so on. This can be a roundabout way for red to ramp, draw cards or borrow the nasty abilities of Resolute Archangel, Terastodon and other off-colour haymakers. Don't forget you can also get a permanent copy of your token if you Populate it before it's gone.

Bind: The best cards are often not only powerful but completely unexpected. Green isn't exactly known for its countering, but this cheap cantrip lets any mono-green deck stop combos, hose Strip Mine/Ghost Quarter, prevent a planeswalker ultimate or turn Aetherflux Reservoir into a losing proposition. All this for two mana and it even replaces itself!

Arena of the Ancients: We all know Karakas is banned for hosing commanders too hard, but the Arena does a decent impression and is still fair game. This cheap artifact can tap down even commanders with hexproof or vigilance and keeps them locked down - especially useful for colours that don't typically have strong control options, like black and/or red. It's another easy answer to voltron commanders.

Righteous Aura: This card doesn't read as too impressive, but performs a lot better than you might think. 2 life is a pittance in the face of some of the steroid monsters you'll see in any given EDH game, and it allows you to ignore Commander damage entirely as well as any other non-creature or even non-permanent threats that might take a chunk out of you. Best of all, it doesn't even target, allowing it to bypass hexproof, shroud and protection.

Druid-combo decks of any variety really appreciate being able to assemble the pieces they need to win. On that front, iâd suggest adding Eladamri's Call and Finale of Devastation. Having better access to assemble the Druid-Combo may lead you towards looking for more immediate wincons. The obvious one is Walking Ballista. Shalai, Voice of Plenty is also a great addition as a 1-of to help protect & pump the team

that_dude33 I ran it for years. Love the card, but with Craterhoof Behemoth and Finale of Devastation as backups, it's not needed.

Thanks for the suggestion though.

Its not just centered around Fynn. Fynn has a big part of the team but thats why I have, Triumph of the Hordes or Blightsteel Colossus to keep the infect team up and running. Incomming cards are lands such as Inkmoth or Quagmire and Dryad and thinking of switch or put in Eldritch Evolution too.

The artifacts are not the main focus with Glissas trigger just an helpfull way to brig them back, when death triggers comes around. And shes a helpfull offensive/defender with her first strike, deathtouch. And theres more ways than just Fynn. For example: Finale of Devastation or Poison-Tip Archer.

I like your input, and I was thinking of making it Green from the start, but wasnt happy with my ideas and though Glissa did a better work making it harder for my playgroup with blocks or atks against me.

Cards like Birds of Paradise and Noble Hierarch/Ignoble Hierarch will help speed up the deck. The deck leans very heavily on getting Sliver Overlord in play but a decent chunk of your ramp is either A) colourless ramp or B) quite expensive to play (as in 3 mana rather than 2 or less). Being able to hit turn one ramp will definitely increase the throughput of the deck.

I would also recommend a bit more tutoring for the list. Green Sun's Zenith and Finale of Devastation are both good tutor effetcs, with Finale acting as both an infinite mana sink and also graveyard recursion.

With all the instants and sorceries you're running you could use Deekah, Fractal Theorist, Talrand, Sky Summoner, Metallurgic Summonings, and Shark Typhoon

Craterhoof Behemoth and Finale of Devastation should offer some other win cons.

Some honest advice, the list seems like it is trying to do too much, it looks like a tempo build but tokens wants to put out as many tokens as fast as possible, blue offers you some other protection you can use in the form of counterspells and white can give them some protection like Teferi's Protection. You could still make due with some of the above suggestions and add some instant and sorcery token generators like Entreat the Angels, though your general would prefer you to run more creatures that can generate tokens.