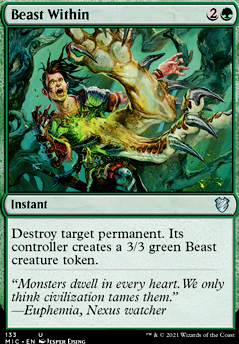 Tanazir is definitely an interesting one. It's like he wants to pull in multiple directions. I think I'd personally lean a little harder into the token swarm style, but that's just me. Deck looks pretty nice, regardless!

Didn't realize the synergy between The Ozolith and Branching Evolution before now. Wow!

I'd definitely recommend Inspiring Call as a means of protection, though. Maybe Simic Ascendancy for the easy win?

Kret on How does Omnath, Locus of â¦

Let's say I have Omnath, Locus of Mana, and Vorinclex, Monstrous Raider or Hardened Scales or Branching Evolution on the battlefield. How many counters should I put on Omanth if I have Omnath and one of those cards when I tap 1 land for 1 mana. Is it 1 counter? Is it doubled counters? If it's the latter, does that mean that for each 1 mana I tap I get 2 mana/counters on Omnath? Can I use this mana as I wish in the same turn?

Great list! Iâve been working on a Gargos build and Iâm curious what your experience has been with the cards Unbound Flourishing, Zendikar Resurgent, and Nylea, God of the Hunt. I see that they were on your original list and then moved to the maybeboard. Were these cards not as effective as they seem? Also have you tested Branching Evolution? Iâm definitely including Whip Silk on my list, what a great find!

If it were me Iâld swap Topple the Statue for Branching Evolution, brave the sands is a far better card than topple the statue. And if youâre wanting infinite turns than absolutely throw in the scepter. The vorel of hull clade youâre running also works very well worth the scepter.

Brave the Sands for Branching Evolution

with proliferate is it worth working in Magistrate's Scepter?

KayneMarco those are all awesome options thank you! for my current changes im only waiting for Herd Baloth once that gets in i will have to play a few games and see what im missing or could swap out. just looking over my current decklist i feel like a good option would be Custodi Soulbinders for Vorinclex, Monstrous Raider or Yawgmoth, Thran Physician

Welcome to the world of commander. You certainly picked a strong deck to modify and build to your satisfaction. Hereâs a few other card ideas to consider: