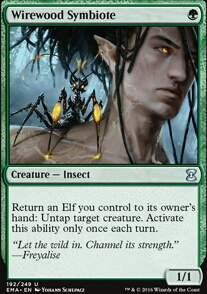 Return an Elf you control to its owner's hand: Untap target creature. Activate this ability only once each turn.

Wirewood Symbiote occurrence in decks from the last year

@Tarlam Great question. I think a dedicated elf package would be naturally at odds with this deck's strategy. Tribal decks really want to be running a critical mass of synergistic creatures - usually 25-30, depending on the tribe. That chews through a lot of deck slots. A Mayael deck has a similar need for large creatures. Unfortunately, there's just not a lot of overlap between those two themes. There are currently 11 elves with 5+ power in Naya colors, and they're all pretty bad. When you try to split the difference, you just end up with a weak version of both strategies.

That said, I think there are some light tribal components that you could reliably tap into. There are lots of good mana dork elves, so it might not be crazy to run something like Wirewood Lodge . Paired with elves that can tap for more than one mana ( Bloom Tender and Selvala, Heart of the Wilds come to mind) you have the makings of a decent mana engine. Then there's stuff like Wirewood Symbiote - perhaps a cheap way to protect Mayael? I think there's probably a way to make an elf sub-theme play well, but I'd be hesitant to include any cards that need more than 1-2 elves on the field to work well.

Pact of the Serpent is indeed Legal in Commander, Vintage, and Legacy. Calling it illegal just because Tappedout isn't up to date is either trolling or just no knowledge of the current products and cards.

On topic, Wirewood Symbiote is a great include, besides the untap function, it can safe a targeted creature. Also handy for repeated value with cards like Wood Elves , Skemfar Shadowsage , heck even Craterhoof can enter a second time if needed. Out of curiosity, can you manage your plays with 29 lands?

Nice deck! Not the biggest fan of Harald Unites the Elves replace with Skemfar Shadowsage , Gary for elves and repeatable with Wirewood Symbiote . The more Elves the better Lathril becomes, milling them is not the best, unless you run Patriarch's Bidding

l13199l: It's going in and while the prospect of bringing out Yeva early speeds us up a lot, this does so much more for other decks, making it feel kinda meh for us. On the other hand, being able to respond with our creatures at instant speed much earlier could have its implications as well. We can also feel better about using Yeva as a resource to things like Natural Order, Eldritch Evolution, or Wirewood Symbiote (Survival of the Fittest) cast her easily after.