: Gain for each Elf on the battlefield. 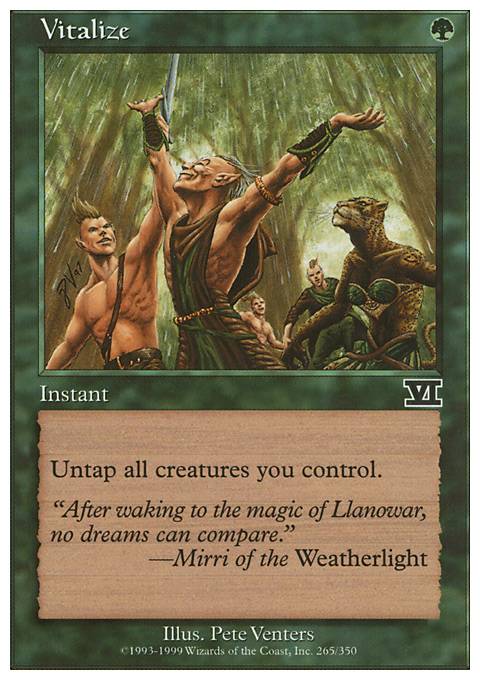 trippy_mcfly Thank you! I have considered the cards you suggested. I don't think I would run Priest of Titania, I feel like the deck doesn't have enough elves to make her tap for more than 1 mana consistently. I'd be happy to run Growth Spiral and Lotus Cobra but I, honnestly, would not know what to cut for them... I'd be open for suggestions.

This is sweet! Have you considered Growth Spiral, Lotus Cobra, and Priest of Titania? I feel like they would be good additions to this deck to make it go a little faster.

Also, is 36 lands the right amount? I feel like you would want to have enough to ensure an extra land card in your hand by turn 2 and 3 for Uro. Plus, control shells like this want to hit land drops more than faster decks.

Nonary27: Omnath, Locus of the Roil is both a card advantage source (in landfall effects) and can run either Food Chain lines or Peregrine Drake + Deadeye Navigator to abuse Omnath's ETB infinitely and just end the game.

As for Katilda, Dawnhart Prime, she makes other humans into mana dorks, but running a deck full of elf mana dorks does the same thing. Additionally you have to run huamns to get the effect, so chances are you're running a bunch of 1/2 mana humans so your can ramp with them but the majority of 1/2 mana human cards aren't good in commander. And there's not a huge number of good human token generators (there are some, but not like soldier tokens or saprolings) and at the end of the day there are plenty of other ways you can turn creatures into mana dorks without locking into a tribal strategy. Not to mention if she gets removed, all of your creatures revert back into not being mana dorks.

And then on top of all this, while she can pump your creatures, it a slow process and can't take advantage of untapping cards like Umbral Mantle the same way running a bunch of elf dorks like Priest of Titania can, where you cna actually combo off with them.

I feel like Druid will usually be worse than Priest of Titania, here. The combination of high CMC and lack of removal also seems rough, in the current meta.

Nature's Lore over Cultivate and Three Visits over Kodama's Reach: Though you are attempting ramp big, it is better to ramp more efficiently than waiting an additional turn to ramp one more land.

Priest of Titania: In a competitive environment you will run into other players who play elves. This elf rarely taps for just a green.

Augur of Autumn: Playing creatures off the top of your library is a strong ability, especially in a mono-green deck that wants to play creatures in mass.

Selvala, Heart of the Wilds: With casting several big creatures, this elf gets better and better the big the creatures you put down. I think a must include in a deck like this.

Bala Ged Recovery Â Flip: A utility card that can take the place of a land in the deck.

Destiny Spinner: Since your deck is focused moreso on your commander being present, having him be uncounterable makes casting him easier to do.

REMOVAL:
Beast Within: Arguably, the best removal green has in its arsenal. Any permanent for a 3/3 trade is almost always worth it.

Crop Rotation: An easy way to go fetch up on of your utlity lands.

Nature's Claim: One of the cheapest artifact/enchantment removal spells in green.

Caustic Caterpillar: a creature and removal spell all in one.

Karn, the Great Creator and/or Collector Ouphe: Artifact hate is a must in nearly every cedh table you sit at. These two will help you more than hurt you.

Kogla, the Titan Ape: he goes infinite green mana with Karametra's Acolyte and a haste enabler. In addition has removal built into him.

Lastly, your curve is a bit high, I'd suggest going down to 4ish planeswalkers or add even more low cmc ramp to the deck like Elvish Mystic, Llanowar Elves, Exploration, Burgeoning, Carpet of Flowers, Wild Growth, etc.

Mana rocks are great, but the biggest advantage of being in green (as far as ramp) is the huge amount of 1cmc dorks. Having access to Llanowar Elves, Elvish Mystic, Elves of Deep Shadow, Boreal Druid, Deathrite Shaman, Birds of Paradise, Avacyn's Pilgrim, and also the good 2-mana ones like Priest of Titania, Bloom Tender, and Incubation Druid is a huge boon. Getting the ramp out a turn earlier (or having it tap for multiple colored mana) makes a big difference.

Of course, if you have artifact synergies, that's its own animal and worth going into. For the idea of a boros Phoenix deck, you could also add in a tutor/Sunforger package for good value.