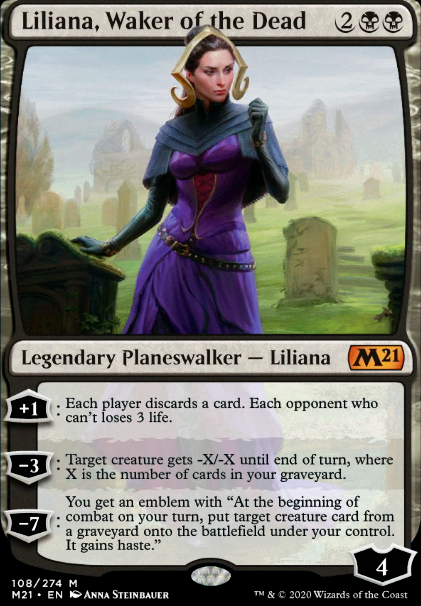 Liliana, Waker of the Dead

+1: Each player discards a card. Each opponent who can't loses 3 life.

-3: Target creature gets -X/-X until end of turn, where X is the number of cards in your graveyard.

-7: You get an emblem with "At the beginning of combat on your turn, put target creature card from a graveyard onto the battlefield under your control. It gains haste."

Liliana, Waker of the Dead Discussion

Mtg_Mega_Nerds on Languish Vs. Ritual of Soot

Hello all. I want to add Liliana, Waker of the Dead to my Grixis Superfriends deck. I have 6 boardwipes, and I think that is too much. I want to take out one to have 5 boardwipes and be able to include liliana. What should I take out, Languish and Ritual of Soot ?

Liliana, Waker of the Dead was in the first draft which focused a little more on hand disruption with Kroxa, Titan of Death's Hunger , and I liked her as removal. I've been trying to find a way to get Rankle, Master of Pranks in but I just didn't think I could afford to replace the early drops. I've always known I'd make this swap considering the mana-cost and effects are so similar.

So my question now is: How many early-game hits do I need? Is it perfectly reasonable to just to cast Cathartic Reunion on 2 rather than set up a board state against aggro? I haven't been able to play the deck yet, purely theory-crafting, but I feel like it could work as is. The build you two seem to be suggesting would take out a lot of the interaction which is something I'm not really used to running or building. I think more importantly, I'm worried about being able to win at all if Offspring's Revenge gets countered. Maybe I'm over-valuing early pressure or I'm exaggerating combo's frailty, but I want to explore this build a bit more first.

What do you think of the Legion Angel suite? Worth it?

Sorry about the historic suggestions earlier, I got a bit confused.

Anyway, more on topic, you certainly should do your best to put cards in your graveyard fast to get the most out of Offspring's Revenge . Feels really bad to have it in play and nothing to bring back. The suggestions you got from usurphling make a lot of sense and I would like to reiterate that cards like Gyruda, Doom of Depths and Rankle, Master of Pranks would be right at home here and would work both as payoffs and enablers.

Considering today's meta, I feel like it could be a good idea to run more than 60 cards for you since you'll be going through your deck quickly and there's a lot of rogues and mill deck around. You only run 3 Offspring's Revenge as it is, so you could easily add another 1, a few more big hitters, 4 Cathartic Reunion (and some lands, obviously) and I'm sure the whole thing would work better in general while not being too prone to decking out.

Btw, Liliana, Waker of the Dead is a cute addition but I don't think I would go as high as 3 copies of her. You don't focus on getting your opponent empty handed, and discarding cards without drawing any isn't that great for you either. I don't think you'll have a hand full enough to have something you actually want to discard turn after turn. Something that just mills you could work better without destroying your hand. Her Ultimate and -2 also fights over your graveyard with Offspring's Revenge .