Destroy target creature if it has converted mana cost 2 or less.

Revolt â Destroy that creature if it has converted mana cost 4 or less instead if a permanent you controlled left the battlefield this turn. 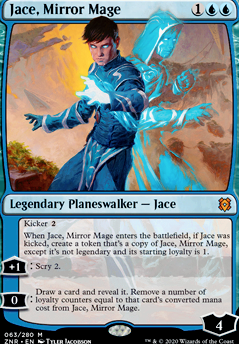 ya definitely need one more removal(Ã4), do counter spells in side board work? Btw would love more removal ideas Dunno what else could fit deck Fatal Push ?

Deck seems slow, you need a lock piece. Something like a couple wraths or, if you can possibly afford it, Ensnaring Bridge is insane.

What you need is more board interaction, like Fatal Push or even just Cast Down, and some untapped duals. Choked Estuary is okay, River of Tears might help. Just lands that can ener untapped, regardless of how often, will increase this decks power by a lot.

On top of that, I'd use 4x Ipnu Rivulet and 1-2x Nephalia Drownyard. They're both okay but Rivulet is a free roll and Drownyard is a little less so.

Kor Outfitter is not there to be fast. Its there to get around effects like Stony Silence, or Collector Ouphe, which stop equipping artifacts, as equipping is an activated ability. Outfitter is essentially copies 5, 6 & 7 of Sigarda's Aid.

Also the deck's main goal is NOT to be as fast as possible. As thats what causes the classic RW glass-canon version to be unplayable competitively.
This variant was built to be more resilient.
Losing to a single Fatal Push, or Lightning Bolt is simply not acceptable in modern. I attempted to solve the problem by:
1# rebuilding the deck in such a fashion that allows drawing a lot of cards, and thus replacing assets that get removed from the battlefield (Sram/puresteel + cheap artifacts)
2# have redundancy in key effects, be it Golem-Skin Gauntlets for the hammer, outfitter for sigarda's aid, or Sram for paladin.

If I was going to spend 20 dollars for a card in this deck it would be Thoughtseize not urbog, as for Fatal Push I'm working towards getting feches but you're right that until then i should put in something else like Victim of Night