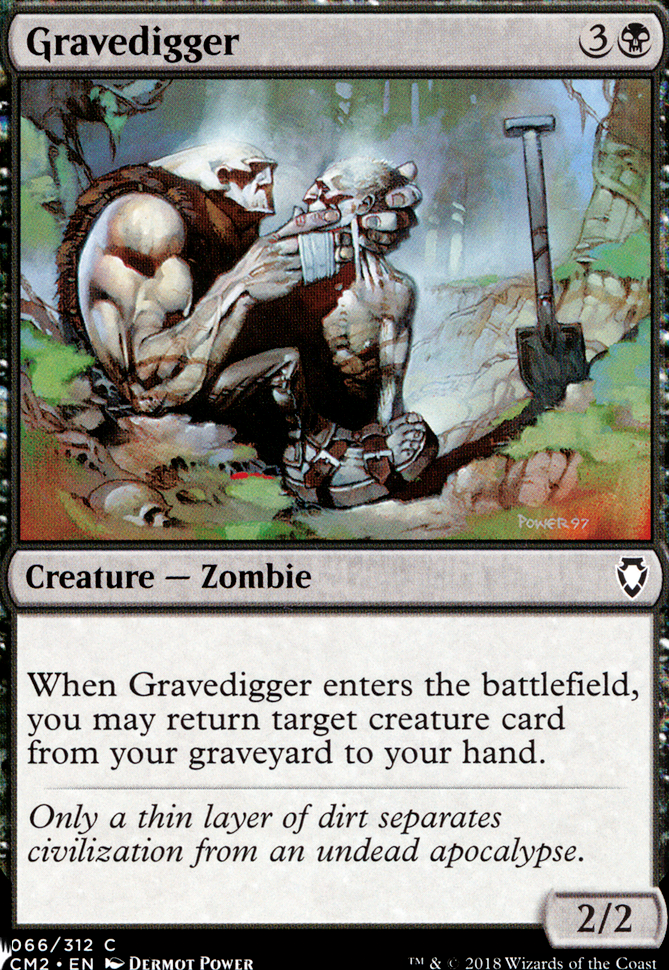 When Gravedigger enters the battlefield, you may return target creature card from your graveyard to your hand.

Gravedigger occurrence in decks from the last year 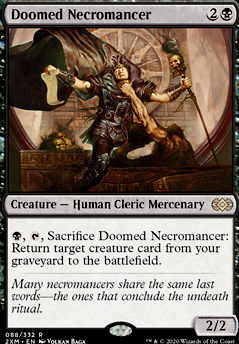 Hey wallisface! Thx for the advice!

Grave Pact was too slow, and I removed it a while back. Didn't realize that I hadn't updated here! Just found a faster way to export/update decks today.

With the removal of Grave Pact I also added several spells for removal. Tragic Slip easily satisfied for -13/-13 through sac outlets. Fatal Push can hit its 4cmc level just by cracking a land.

Fallen Ideal serves as an additional sac outlet, plus flying. This deck can't run w/o a sac outlet, hence the redundancy there. During playing, 4 did prove to be a bit much.

sigh normally I would contribute the mistakes I made in that comment to tiredness, but I woke up very rested today... Let me correct some of my mistakes. Yeah, Gravedigger was in M20. The version in your list is M19, which messed me up, but you're right. You are also right about Cauldron's Gift , which is a great card in this deck. I meant to say Forever Young , which does eat up draws.

I think you might also do well replacing Witch's Cottage . It's almost a dead card until you get 3 swamps out, and it has the same "eating up draws" effect as Forever Young in that it puts that card on top of your library.

Gravedigger was printed in M20 so it is definitely Brawl legal.

Revenge of Ravens was in the deck because it was a good black card, but I've found that it's usually a dead card in my hand so I took it out for Dread Presence .

I've liked Cauldron's Gift so far. In one game on turn 5, that card dumped and reanimated Vilis, Broker of Blood on turn 5 or 6. I'm not sure what you mean when you say cauldron's gift has 'eats up the draws'.

I do like The Cauldron of Eternity and Witch's Oven . Thanks for the suggestions!

Gravedigger isn't brawl-legal. I don't know why TappedOut thinks it is.

I really like this deck, but I see a few things that I think would help. Burglar Rat seems expensive for the effect. Field of the Dead is just a tapped colorless land (AKA, a complete waste) since you don't even have seven differently-names lands in the decklist. Witch's Oven can help you get some use out of creatures that are about to die anyway (e.g. in blocking situations). And although Revenge of Ravens doesn't really fit the theme, it is a great black card that essentially stops your opponent attacking with anything power 2 or less. Cauldron's Gift is an absolutely horrid graveyard recursion card, since it eats up the draws you could be using for other things. Even if you only use it to get one card from your graveyard and you draw it straight away, Cauldron's Gift itself has taken up a draw slot. It's worth thinking about The Cauldron of Eternity , which can help you get back on your feet after a big Massacre Girl wipe, but I think it'd be situational and hard to use, so think about it some.