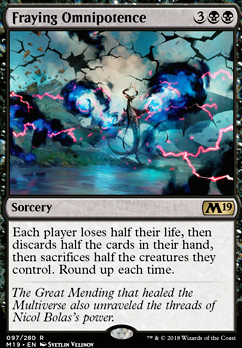 Each player loses half their life, then discards half the cards in their hand, then sacrifices half the creatures they control. Round up each time.

Fraying Omnipotence occurrence in decks from the last year

The End is Near
by thetrueroman

Greven Captain of Predators
by tag3970 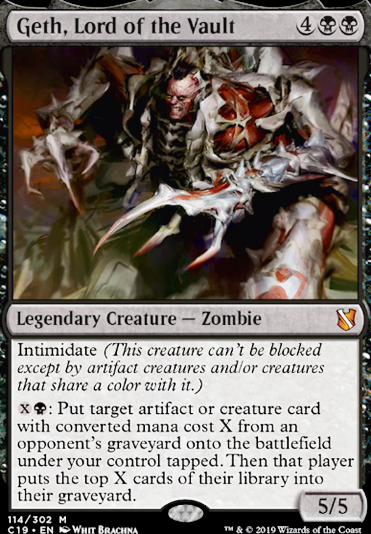 I still think Havoc Festival may have a home in this deck. It essentially guarantees a 1-hit KO if you make it to your upkeep with your general in play due to the insane amount of damage Greven gains from the life loss. Even if they kill your general before you can swing, it's halving everyone's life total in 1 turn around the board. Since this seems to be a somewhat mid-range deck, it certainly can bring life totals into more reasonable ranges.

For the same reason as above, perhaps Infernal Contract , Fraying Omnipotence , Doomsday (lol), Cruel Bargain , and Heartless Hidetsugu could be useful in buffing old Greven.

Would you kindly do some tutoring?

Magus of the Coffers and Cabal Stronghold and the less budget version Cabal Coffers can help you ramp, especially when paired with your Urborg, Tomb of Yawgmoth . And you can use Expedition Map to help find the land combo pieces.

Some other cards I'd recommend:

No Pox , Fraying Omnipotence , or Death Cloud ? I feel like these cards don't get nearly enough love, and considering how much these should be draining your opponents, you should get that extra card whenever you cast them.

speedykoala Glad you're enjoying it! Always makes me happy to hear comments like that.

Honestly that's been something I've been struggling with too. The two biggest issues I've been having are getting the deck online quick enough and dealing with the table hate.

Since a lot of the major cards in this deck are 5 CMC or higher, it can take a bit to actually start dealing the damage I want to do with this deck. I tried adding in more ramp to deal with this, but maybe even more is needed.

But getting back to your question; I think a mixture of both suggestions would be best.

Politics never hurts unless you really abuse it and overdo it. Any sort of actions you can take to throw the heat off of you are going to be valuable in any deck you play. Even if it means sandbagging a couple of cards back in your hand so that you don't seem like a threat until you have an explosive turn then it might be worth it. Given that this deck deals a lot of its damage in small increments it might not be possible to realistically take this route often, but it might be worth considering trying to combo Manabarbs with a damage doubler instead of throwing it down on turn 4. Or maybe instead just hold your pieces until someone else at the table becomes an established threat so that their eyes aren't on you.

As far as pillowfort goes, there are definitely some pieces that you could run that aren't currently in this deck just because I couldn't find the space for them. Smoke , Glacial Chasm , and Dread are all perfectly good options to be running in this deck to discourage attackers. With the addition of Urborg, Tomb of Yawgmoth , Cabal Coffers , and Crypt Ghast I think Pestilence could be a decent option to run alongside Pyrohemia to help keep the board clean. Plus there are plenty of other boardwipes like Damnation , Life's Finale , and Chain Reaction that this deck isn't currently running but wouldn't be bad options since the deck is pretty creature-lite.

I don't know how you're feeling about the discard package in the deck but I think I might tone it down a bit. It brings a lot of hate and doesn't accomplish what I hoped it would. I thought it would reduce the amount of options people had to deal with Xantcha and incentivize them to use her activated ability more. In my experience it just causes people to want to attack me more instead. So I'm considering removing Sire Of Insanity , Necrogen Mists , and maybe either Pox or Fraying Omnipotence .

Hope this helped a bit! Sorry I couldn't give a better answer, still ironing out the kinks myself.

Bolas and The Black Order

If this is based off of thanos you need Fraying Omnipotence