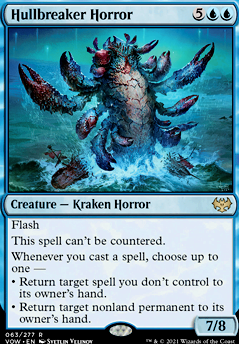 Whenever you cast a spell, choose up to one â 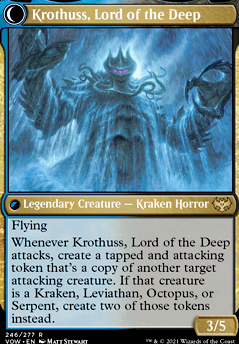 Polaris on Can I choose neither option â¦

Yes, Hullbreaker Horror's ability is essentially optional. You don't have to bounce your own permanents if you don't want to.

Davinoth That tends to happen with cEDH lists, especially if they are stax oriented. Dissipation Field can also help. If you're looking for a top end (like the two you have in your maybeboard), also consider Hullbreaker Horror. I just noticed this card and am adding it to my UG list

A couple of sea monster upgrades to consider:

Even though you have Mirror Gallery, Lorthos and Tromokratis are legendary creatures who when copied by Krothuss don't do much since they don't have an effect when they ETB and Lorthos attack effect is not mana efficient at all with copies. Striped Riverwinder is helpful to transform Runo since it's one mana cycle to draw a card and put into your graveyard. When you control copies of Hullbreaker Horror then it can bounce all your opponents nonland permanents with Sol Ring + another 0-2 CMC mana rock by constantly cast/bounce.

Stormtide Leviathan pairs well with Krothuss since he has flying. Beatdown your opponents with 8/8 unblockable Stormtides who's ability can make it more difficult for your opponents to swingback at you. Stormtide helps Wrexial, the Risen Deep since he has islandwalk. Stormtide also pairs well with Wonder to give all creatures you control flying so they can attack. Without Stormtide Wonder is still powerful especially with Spawning Kraken since you have plenty of Islands. Wonder is nice when a strategy here is to get creatures into your graveyard.