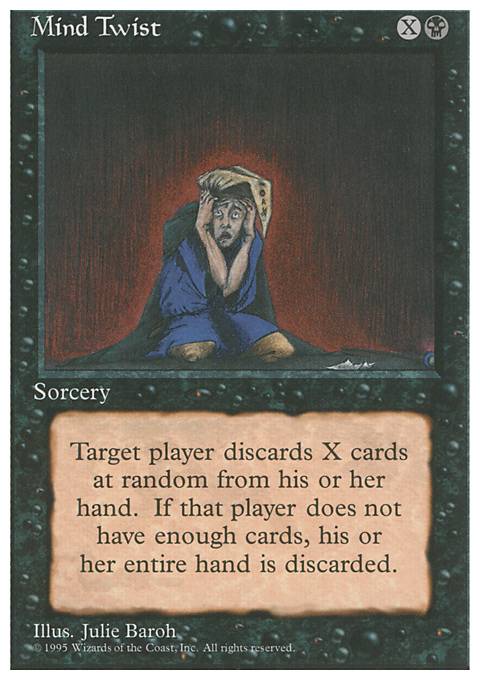 Mind Twist occurrence in decks from the last year

Nathy poo - Dobby is a free elf
by SilentBladeOni

Howdy! Unfortunately Deathrite Shaman has the color identity of both black and green, so you can't "legally" play that card! I'd suggest replacing it with something like Vilis, Broker of Blood as that card is BONKERS when your commander is on the field, just draw ALL the cards!

Also another card to look at could be Mind Twist . Making an opponent discard all their cards in hand can be really backbreaking!

Thank you, I appreciate your appreciation. In light of your suggestion, i'm looking at cutting Fleshbag Marauder for Phyrexian Obliterator . I've liked the idea of Mirage Mirror but I don't get what the potential value you see in it could be in? Is this perhaps similar value in mind to Profet93 and I's discussion over Vesuva and Thespian Stage? Likewise are you seeing the same similarities in Homeward Path and Guardian Beast ?

Good swap on lotus. I disagree regarding Oppression vs. Desolation. Oppression forces them to either discard a permanent which you get or a non-permanent which they would have wanted. I get your hesitatation due to the symmetrical nature which you can still abuse and desolation is less symmetrical in a sense. But I think oppression has much better value. Both are good though and preference is meta dependent too. Don't forget, blue players with artifacts and green dorks can bypass this so keep that in mind.

How does All Is Dust work with your commander, if at all?

While Thoughtseize > Dread Return, Mind Twist > Thoughtseize. While it is random, costs more and doesnt provide you with information, the ceiling is much higher and I think outweighs the negatives.

Thanks for the upvote, much appreciated and I absolutely love the Head Games combo, as far as I know I'm the first to figure out that one.

Infernal Darkness is good but I don't like the cumulative upkeep of since that's mana I could be using for a spell or effect. I do have one in my binder just in case.

Mind Twist is a great card in the deck but I don't like the mana intensive side of X.

Ill-Gotten Gains already got a foil one, amazing card. Considering it.

Cavern of Souls and Boseiju, Who Shelters All - How did I overlook these!?

As for Megrim like cards, I want to thoroughly test them out before cutting them. I figure if I make someone discard their hand that's automatic 14 damage.

Extraplanar Lens I run in my Avacyn, Krenko and Korlash builds (On my profile) and I've never had issues running 24 or less basics with it. If I need to I might up the land count to 32.

Thank you so much for your feed back, gave me a lot to think about wish list some stuff.

+1 just for the fact you have Head Games!

Have you considered adding Infernal Darkness for redundancy to contamination which A) Doesn't require a creature and B) Doesn't impact your own coffer, lake of the dead, phyrexian tower, nykthos, etc....

Mind Twist - Extremely powerful and it seems like you don't mind hitting only 1 opponent.

IMO - Megrim like cards are winmore and while they are nice once you get going, they don't provide any actual value, which you will need when the table attempts to beat you to death

I've found extraplanar lens to be too risky because A) You go down a land B) Symmetrical given many are runnign snow-covered, albeit, a meta choice C) You don't have enough basics to warrant it's inclusion

Cavern of Souls / Boseiju, Who Shelters All - Antiblue/synergy with Nethervoid