-X: Exile each permanent with converted mana cost X or less that's one or more colours.

-10: You gain 7 life, draw seven cards, then put up to seven permanent cards from your hand onto the battlefield.

Karn, Stax of Urza
by Tanion

Duel: A Commander Variant
by SketchyScribbler 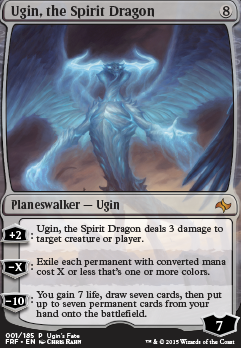 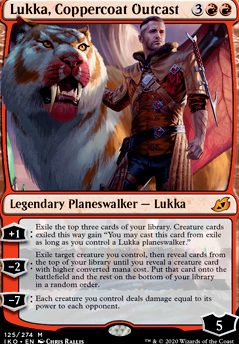 DragonSliver9001 on A New Way To Play â¦

Snips500: you can ask "what ifs" all day, but they dont really matter. the whole purpose of Blood Moon is to shut down lands. play around it the same way as any other format. also keep in mind that your idea of fun is subjective. for all you know, making it harder to cast the commander could have been the intention of the format to begin with. and if you wanted a 3+ color deck, you already have to run color fixing, just like in regular commander. so your point about "wasting a turn" just isn't valid. mana ramp and/or color fixing can have big payoffs later. just look at tron in modern. they spend their first 2 or possibly 3 turns doing absolutely nothing that impacts board state, then turn the tables with their turn 4 Ugin, the Spirit Dragon

SynergyBuild on Could Black Have This Effect?

DragonSliver9001 Honestly Idk why people like Trius even complained, Ugin, the Spirit Dragon is literally in standard, we have colorless permanent removal and have had it for a long while xD

You should definitely run Chain Veil. Besides being a great card in general for superfriends, it combos extremely well with Teferi, Temporal Archmage.

Also, Call the Gatewatch is a great tutor for walkers, and you should also definitely run Ugin, the Spirit Dragon

It was playing really well. The biggest problem was that it is not Ugin, the Spirit Dragon. Everything else was working great. It churns out zombies very well. it played consistently. I tried putting in Banishing Light because I only had one Deputy of Detention but being able to fetch the Deputy and always having an abundance of 2 drop enchantments makes it pretty crucial. I did add one Deputy (giving me 2 now) and I think I'm gonna tinker with the other two slots. I think I have 2 Dungeon Geists that I'll throw in for now.

The only other change I made was adding 2x Temple of Silence and removing Wolfwillow Haven as I was getting stuck without white mana too often. I also removed Kenrith's Transformation to accommodate The Binding of the Titans which play pretty well with the rest of the deck.

-4: Ugin deals 4 damage to each creature and each planeswalker or destroy target permanent

Anyway ugin rant over. This is a much fairer card