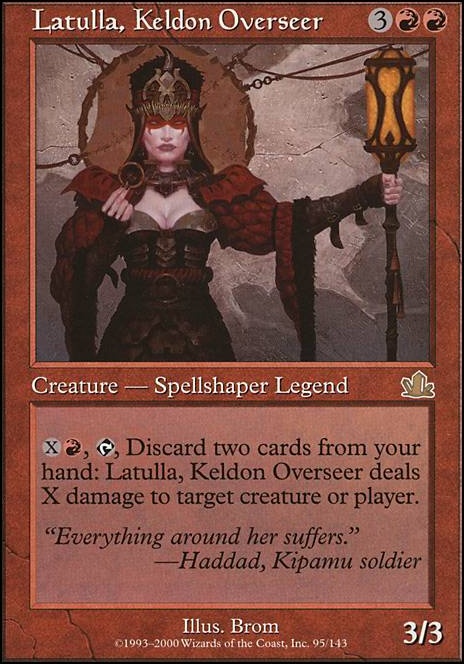 10 Things I Hate About Bolas
by DanyTargaryen102 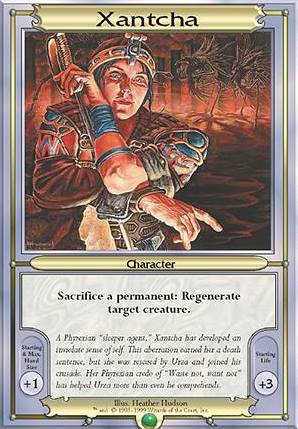 One Way Trip to Ping Town
by IntegerDevourer Ruric Under Construction
by dipnlik 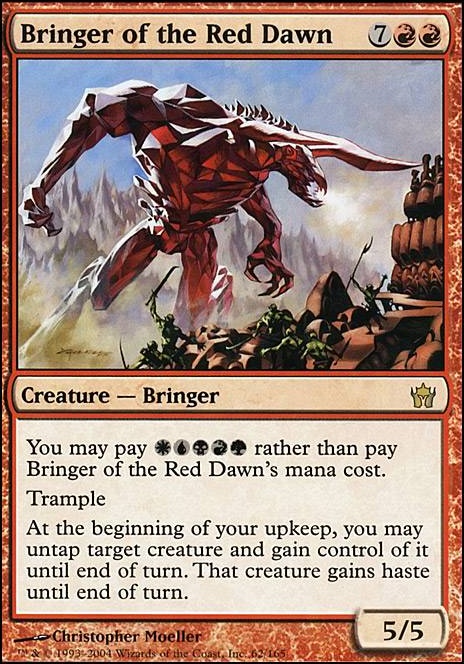 Latulla, Keldon Overseer gives you a way to put birds in the graveyard and stack some damage on top.

New addition to the decklist section, and a new tier:

Not sure if anyone's noticed (Nvrm, you noticed), but I added a TierBanned decklists section. I thought it would be neat to be able to show people what the banned commanders' decks might look like if we were allowed to play them. So far it only contains thegigibeast's Griselbrand storm list and Lilbrudder's old Leovold list, but anyone who wants to make a hypothetical decklist is welcome to.

The only rule is you can't use other banned cards in the 99, because that would be unrealistic compared to the other decklists in the description. The point is to see how the banned commanders would stack up as cEDH commanders, not how broken it's possible make the format with no banlist. There isn't much competition on cEDH decklists for banned commanders, so if you think you can make a good one then have at it. (Dibs on Rofellos.)

I've also added a new tier. As I'm sure you're all aware, we're going to be getting a new Un-set soon, Unstable. In preparation for the momentous occasion, I have added TierInsanity to the list! It fits right below TierBanned, so the layout of the list won't be affected. Since they are not legal in commander Un-legendary decklists can also fit in the TierBanned section. I will be adding lists for them as soon as I find people crazy enough to make them. (I found a funny Richard Garfield, Ph.D. deck floating around this site already, but I'd be happy with a new submission that actually tries to optimize the deck. Interestingly, an optimized Richard seems like it would actually need to play a lot of expensive cards, since you need to make it to 5 mana before you can use his ability.)

Also, a few pieces useful information on the un-commanders you should use if you're going to make a decklist:

Ohthenoises pointed out in comment that it might be worthwhile to consolidate a list of every commander that can be used to win the game as a outlet for infinite mana. I went through the list and here are the results:

Interesting things to note about the results here:

Maintenance of the Lower Tiers:

Based on evaluating commanders off of infinite mana gamelans, and my review of the lower tiers, I've decided to make some general upkeep adjustments to the lower tiers.

The leaked commanders' placements so far. Not linking them, you can look them up if you want to.

Chandra Ablaze or Chandra, Flamecaller seem like they fit right at home!

Shard Phoenix? Seems janky, but I like the premise of discard something to Hazoret, then returning it.

Let's take a look at some burn spells:

I think Illusionist's Bracers ought to work.

Braid of Fire is a very janky way at generating boatloads of red mana to use only during your upkeep. could sink a ton into instant burn spells?

mikedaddyswagz| No problem. I love deck teching with under-powered/ underplayed commanders especially ones with hidden potential that just need the right exploit to bring out like Latulla, Keldon Overseer, Sisters of Stone Death, and Yeva, Nature's Herald.

Crayfish on What commander should I pilot ...

Since I figured out the basics of commander, I have ended up with 5 diffrent commander decks.

Ezuri, Claw of Progress: The C15 deck that I bought and edited to make more powerful. People don't like facing him. I steal their things. :3

Daxos of Meletis: My first EDH deck, its a straight to the point voltron deck where I gain a ton of life and steal your topdecks.

Savra, Queen of the Golari: Its a janky golgari EDH deck. Doesn't function well. Moving along.

Jalira, Master Polymorphist: A janky yet competitive blue deck that turns creatures into other creatures. Its a lot of fun to pilot.

I have my 5 EDH decks, but I feel like I still have so many legends, and building/playing EDH is so much fun. So I have grabbed most of my legends, good and bad, and posted them here. I would like to know which one you all think should pilot my next EDH deck.

Note: I am trying to preserve as many of my non-edh decks as possible, since not everyone likes to play commander all the time.

Sidisi, Undead Vizier: Mono-Black devotion/sac maybe? She is a reusable tutor though, which could be neat.

Erebos, God of the Dead: More mono-black devotion? A 5/7 body for 4 isn't bad, and the card advantage is nice in EDH. Could be fun.

Masako the Humorless: Seems more like a 99 card, but its a legend, so its up here. Idk what deck she would pilot to be honest.

Kiki-Jiki, Mirror Breaker: I love this guy. Got him for free from a friend (original Kamigawa version too), and he is fun to mess with. A 2/2 body for CMC 5 is a bit... concerning... but some crazy shenanigans could go on with him, especially with all the red Undying cards.

Lazav, Dimir Mastermind: Good ol' Lazav. Icould see him at the helm of EDH mill, but is EDH mill really a good idea?

Zurgo Bellstriker: Is he a good commander? Idk, dashing him for 1 each turn with a Hero's Blade seems nifty.

Dragonlord Kolaghan: Only here because its a legend. Seems like a pretty crappy commander to me. :P

Krenko, Mob Boss: GOBLINS EVERYWHERE! I love Krenko, though making a Krenko EDH would force me to dismantle one of my favorite casual decks, my Mono-Red Goblin Fun Time deck.

Ben-Ben, Akki Hermit: Seems like a better 99 card for Krenko than a commander, but who knows?

Lavinia of the Tenth: Meh. Detain is cool, but is it cool enough to boost her out of the 99? Probably not.

Skeleton Ship: This card is quite funky. -1/-1 EDH? I would need to purchase singles for that one.

Noyan Dar, Roil Shaper: My newest legendary, he seems like he could build a fun edh deck. GO MY PRECIOUS LANDS, ATTACK! Nothing like having every instant/sorcery animate a land for no additional cost.

Vorel of Hull Clade: Counters all the way home! I already have Ezuri though, so is he better as a 99 in ezuri or worth building a new deck to pilot?

Tymaret, the Murder King: Seems lackluster as a commander. I wouldn't know though, I don't have a huge scope on how each commander plays.

Marath, Will of the Wild: Got him in a card lot. He is a go-to commander. I might build with him anyways, because he is literally build for this format.

Narset, Enlightened Master: Narset is nifty. I bet she would make a nifty commander deck.

Anafenza, Kin-Tree Spirit: Another legend who seems more like a 99'er then a general. She could pilot a mono-white token/soldier deck though.

Medomai the Ageless: A cool sphinx who gives me extra turns. I don't know what deck he would pilot, but it could be cool.

Latulla, Keldon Overseer: Discard for straight damage. Not sure how well she would do as a general.

Jiwari, the Earth Aflame: Like Latualla, but without the discard clause.

Zurgo Helmsmasher x2: Zurgo wants to smash some face. He could be a fun aggro commander.

Alesha, Who Smiles at Death: Could be another fun aggro commander, or a 99'er in Zurgo.

Kira, Great Glass-Spinner: Seems like a powerful creature, put good enough for a general? Looks like another 99'er.

Grenzo, Dungeon Warden: Could be another goblin commander, and he opens up the possibility of black goblins cards, like Dralnu's Crusade. Same problem as Krenko though, I don't know if I want to take apart my goblin deck.

Arcanis the Omnipotent: Expensive, but gets me lotsa cards.

Jin-Gitaxias, Core Augur: 10 MANA! Thats a lot, but he keeps my opponents hands empty while making sure I always have gas. Though, he could mill me if I'm not careful...

Ishi-Ishi, Akki Crackshot: His only upside is that he rides a goat. Thats it. Next!

Slobad, Goblin Tinkerer: Artifact funtime with Slobad! I do hope to get the C14 Daretti deck though, so Slobad would probably ride in the 99 there.

Kiku, Night's Flower: Interesting card, feels more like a 99'er than a general.

Hythonia the Cruel: Cool card, though I own like 3 Gorgons total.

Anthousa, Setessan Hero: This card feels underwhelming. I bet in the right build though, this card could be nice, but when the lands are only 2/2's, the risk on creature based land destruction seems pretty high.

Prime Speaker Zeganna, Momir Vig, Simic Visionary, and Katseto, orochi archmage: All 3 are cool simic commanders, but they are also part of the 99 in my Ezuri deck.

Wow, thats a lot of legendaries that aren't currently commanders! What do you guys think? Which legends here are the most fun to build/pilot? I would love to know! :D