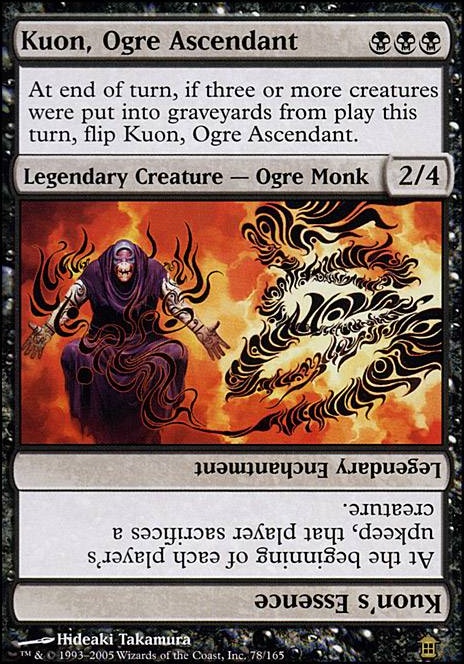 At the beginning of the end step, if three or more creatures were put into graveyards from the battlefield this turn, flip Kuon, Ogre Ascendant.

At the beginning of each player's upkeep, that player sacrifices a creature. THROUGH ANGER, WE HUNGER FOR GOD
by Nevinyrral_Mayor_of_Urborg 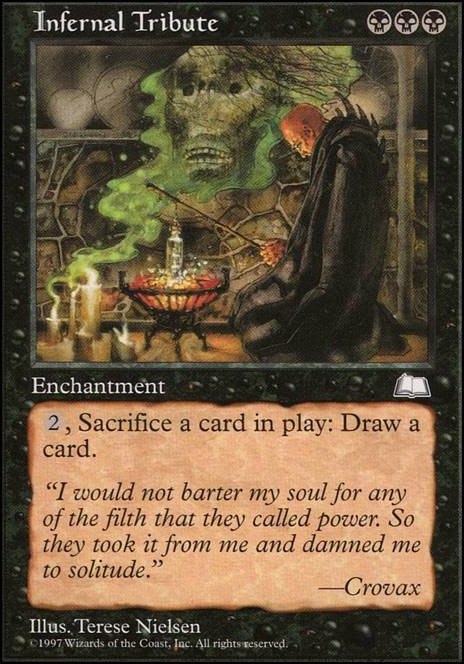 Sacrifice the World
by TheKingCrab

how not to Kuon (Budget version)
by Blizzard_Squid 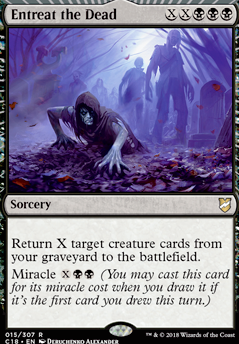 Kill everything that moves
by Faraven Hi bro! love the deck, I have some suggestions =) I know it's a creature but Mindslicer fits really well in here. Also Bottomless Pit looks nice. I've seen other creatureless decks with Kuon, Ogre Ascendant as commander which seems really annoying. see you bro =)

lance4224130 Hey, as we are playing exactly the same colours EDH decks, I had to come here too!

I started EDH with a Drana, Kalastria Bloodchief deck (which is on my page if you want to have a look, it may give you some ideas).

As experienced, I don't really like Magus of the Coffers. Even if you got the boots to directly equip him (and you don't play them, which is understandable with Erebos as commander), it's really slow. If you're looking for a card with a similar effect, you could put in a Doubling Cube (a bit greedy though, but I love this card), an Extraplanar Lens (play snow-covered swamps if you go for it, so your opponents won't get any benefits) or Jet Medallion.

Consuming Vapors feels badly slow and only affect one dude. Even if it has rebound, I won't play it. I play Choice of Damnations in my Rakdos, Lord of Riots deck because I have the ability to down everyone life totals quite quickly... in a hard control deck as this one, I think it's just not good enough. Your opponents will often choose to lose something like 9-10 life points on the best cases, and you will spend all your mana in a useless card. Same reaction for Consume Spirit, Soul Burn and Drain Life. Except maybe in some greedy Jeleva decklists, Curse of the Cabal seems like a bad card for EDH.

If you want to play devotion, Phyrexian Obliterator and Necropotence are staples. Erebos's Titan is not bad either (and flavorful). Dread Shade at leat deserves some testing playtime. Even if it's not your initial strategy, Grave Titan is huge and ugly - so it's definitely everything you like in his kind of deck. Kokusho, the Evening Star is a great tread to take advantage on your opponents.

If you want to stay on a more ''creatureless'' devotion version, you could try out Kuon, Ogre Ascendant which is hard to flip, but pretty damn effective.

All Is Dust makes out as a great board-clear, but you should keep in mind it also forces you to sacrifice your enchantments. Phyrexian Scriptures are nice in synergy with The Abyss, but it's quite a slow card. Massacre Wurm is a nice card to control the board (hum... to destroy every token deck), healing you and giving you a strong body on the battlefield.

Grim Tutor and Increasing Ambition are another good tutor options.

Bitterblossom with Contamination and/or Attrition is op - Bloodghast / Ophiomancer serve the same purposes, and you will also love to add Skullclamp if you go for it, having access to a nice sac outlet is what makes monoB that strong in my opinion (also with cards like Ashnod's Altar, Grave Pact, Dictate of Erebos (flavorful!) etc.).

Painful Quandary is an insanly powerful card in Control decks. For other cruel cards as this one, you have Lethal Vapors, Oppression, Death Cloud or Capital Punishment.

Waste Not could fit if you add some mass discards effects (like Bottomless Pit (not the best example as you also discard AT RANDOM, meh...), Vindictive Lich, etc.).

You have the Lich's Mastery which seems funny.

I certainly forgot a lot of cards, but I'll let you know if something else come to my mind. Have great fun building it up!

Mardu_Maniac awesome! I'm going to be brewing a Kuon, Ogre Ascendant deck before taking on liliana again but it will be almost the same list absent a few things(mostly discard). If you need help with your list shoot me your list!

Honey, why is there a pot roast inside the candle?

Hi there, I was wondering if you have considered just a few stax cards since you will most likely have enough tokens to offset their effects? The cards I'm mostly thinking of are Smokestack, Small Pox and maybe even Descent into Madness? deathcloud and Pox might be too much though.

Other cards I'd recommend are removal such as Innocent Blood, Barter in Blood and possibly even Kuon, Ogre Ascendant though he's rough at BBB cost.

Cloudstone Curio is a great value engine and Cryptic Gateway could be pretty awesome too. Anyways hope it helps!

Hard to say, it is a very tight list.
A card I have no experience with is Kuon, Ogre Ascendant. Does it pull its weight?
Otherwise I would suggest cutting Dark Prophecy. They really fulfill the same the deck and the Grimoire not only pairs beautifully with Words of Waste but also is a may effect and so will not bite you in the ass.

So, a while back I had built my first EDH deck around Horobi, Death's Wail.. As I expected, if left alone I could take over the game, but instead I seem to only draw hate.. So now I'm looking to switch Horobi out for something a little less "cute", and hopefully without having to completely change my current list (aside from Horobi-specific tech, of course)..

Here the deck I'm working with..

Here's the list of potential Mono-Black Commanders that I currently own, and therefore to choose from.. My "Top-3" are listed first, the rest are in no particular order..

The general goal here is to have a definitive Mono-Black deck that can survive at least a moderate amount of hate, and without being too cheesy in the process..