When Ryusei, the Falling Star is put into the graveyard from the battlefield, it deals 5 damage to each creature without flying.

Ryusei, the Falling Star occurrence in decks from the last year 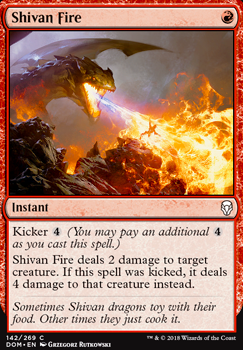 Hey, if you have Smothering Tithe and Arcane Signet then add them because they're some the best ramp for five colors to play.

If you're looking for Dragon power then consider moving from the sideboard to the main deck Utvara Hellkite and Steel Hellkite? Utvara is among the best Dragons because it creates a Dragon for each Dragon you control that attacks, each Dragon not just Utvara which can create a huge Dragon army.

Utvara is busted with Dragon Tempest, Scourge of Valkas and Temur Ascendancy, Kindred Discovery, Elemental Bond. Tempest/Ascendancy because they give it haste. Tempest/Scourge because each time a 6/6 Dragon is created it does damage to target creature or player equal to the amount of Dragons you control. Ascendancy/Discovery/Bond can be a lot of draw because each 6/6 Dragon created draws you a card.

Scion of the Ur-Dragon and adding Utvara are reasons to also include more tutors that can search for them and put one of them into your hand. Steel Hellkite is also a Dragon upgrade as it's repeatable attack ability can wipe out an opponent's board state, one opponent at a time. Steel is good with lots of ramp.

Ryusei, the Falling Star gets my vote. another flyer to add to your swarm of pheonixs and if it dies you keep your board. either that or Urabrask the Hidden as it allows you to be extra aggressive.

The Dragon Gun (EDH) - Zirilan of the Claw

Steel Hellkite has been reprinted often enough that its pretty much a budget card now. Firebreathing and removal on a stick and you can use your Manifold Key to untap it after combat.

Ryusei, the Falling Star is also budget and can give you a 5 point Earthquake if you have a sac outlet of some sort. Speaking of, I'd add a Quake in place of Hordeling Outburst .

Dragonspeaker Shaman is needed cost reduction for your scaled beasties though looking on Card Kingdom.com, the price on this is a bit higher than I would have guessed. Would still be a very good investment for the deck.

Icon of Ancestry is an anthem and search for more dragons.

You really need more artifact ramp here. Budget options [under $1] include: Star Compass , Mana Geode , Pillar of Origins and Hedron Archive . If you're willing to bump up and spend more than $1 per rock: Mind Stone , Worn Powerstone , Wayfarer's Bauble and Fire Diamond are more powerful options. Sol Ring is an obvious choice as well and if you can afford to splurge on one, I would.

By Force is a really nice mass artifact removal spell that will go a long way towards slowing down the table to give you time to launch the dragon airforce.

Too bad on Sundial of the Infinite , it would really make the deck much better by mitigating Zirilan's drawback.

Also worth considering are creatures with LTB triggers (Leave the Battlefield; AKA Death Triggers)

And literally any aristocrats as well.