Whenever you draw a card, create a 1/1 blue and red Insect creature token with flying and haste.

When The Locust God dies, return it to its owner's hand at the beginning of the next end step.

The Locust God occurrence in decks from the last year Swarm of Locust
by Sapient09 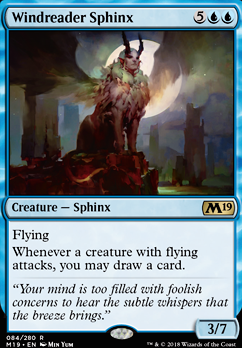 Bolas and The Black Order
by TheFamousMrKing

Nicol Bolas the OathBreaker
by THEDEMIGOD07

My favourites among my collection are:

Ayara, First of Lochthwain Mono-black aristocrat build, a lot of mono black builds share a large number of cards, but with Ayara the variance comes from shear depth of awesome and powerful cards that could work wit her. I keep a running side board of stuff with the deck and find myself continuously tuning and trying new pieces.

The Locust God not a cheap deck to build but I love the way it plays, it can be a slow control deck that goes deep and buries opposition with card advantage. It also can pull off turn five wins that leave the other three players stunned.

Edric, Spymaster of Trest My most competitive deck, I built an elf ball version that has become my âlast game of the night deckâ. The reason I donât play it until the end of the night is because nobody likes you after you take a 15 minute turn 5 and then inform them the game is over. Maybe not the most fun to play against but an excellent tool to have after a losing streak.

Having a mana sink in the command zone is a good idea: Urza, Lord High Artificer, Thrasios, Triton Hero, The Locust God, Oona, Queen of the Fae, etc

Surprised neither Laboratory Maniac nor Jace, Wielder of Mysteries is in your deck

Itâs a alternative to the zndrsplt and Efreet win

Not to mention you could say the same for

Not sure if you caught this, but there are 2 The Locust God in the deck

I need to ask, how do you feel about tutors or infinite combos because I have more suggestions if you are okay with either. As far as token producers though, Brudiclad, Telchor Engineer

Sage of the Falls + The Locust God = draw your entire deck, then you just need a spell that finishes everyone off. luckily for you, there is one such card and it only costs 1 mana so you can win the turn after you get The Locust God out. Firestorm kills the table once you've drawn enough cards. you don't need to draw your whole deck. just enough cards to kill everyone, but if they counter it, you die, because you will keep drawing til you deck yourself. To add to the conversation about Niv-Mizzet, Parun he is a great backup wincon. Enchant him with Curiosity or Ophidian Eye, tap him to deal 1 damage and he pings everyone for the amount of cards in your library. and its a may ability, so you don't have to. I turn my locust god deck into a combo deck because as I was playing the deck as a more tribal themed locust deck, I accidentally ran into combos that were very effective so I just rebuilt it into a combo deck. 2 more cards to consider, once your play group realizes that you need your commander out to pull off the combos I just explained is to add Thassa's Oracle and Paradigm Shift to the deck as an extra wincon that doesn't require your commander. what you do is this: cast Thassa's Oracle, then, holing priority after the table has said it resolves, you then cast Paradigm Shift. if they opt to counter Paradigm Shift, nothing happens, If they instead counter Thassa's Oracle, you die, just be aware of this. if Thassa's Oracle resolves you have either won the game or nothing happens, they cannot use a kill spell in response to Paradigm Shift because Thassa's Oracle's ability goes on the stack regardless if she dies or not. you can win as early as turn 2 with this combo, but you need Sol Ring and Lotus Petal in your opening hand as well as Thassa's Oracle, Paradigm Shift and 2 islands, the last card can be a swansong or arcane denial. turn 1: island, play sol ring, turn 2: Island, play lotus petal, crack it for a blue, you now have 3 blue and 2 colorless: cast thassa's oracle, cast paradigm shift and win. you even have mana left over to counter their counterspell if there was one.