: Olivia Voldaren deals 1 damage to another target creature. That creature becomes a vampire in addition to its other types. Put a +1/+1 counter on Olivia Valdaren.

: Gain control of target Vampire for as long as you control Olivia Voldaren. 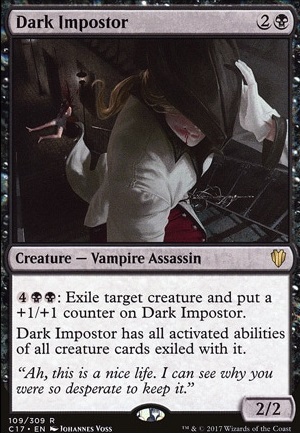 Preparing the Dark Baron
by BPWyndon

Khan of Aristocrats
by Oracle_of_Kruphix

greyninja on How would you build Rakdos â¦

I built a big-mana artifacts deck with Olivia Voldaren at the helm.

We've all run into situations where you have oodles of mana rocks and no where to dump the mana into. Maybe your hand got discarded or you're just running out of answers. Olivia Voldaren is pretty scary once you have 7 mana available to steal any creature at instant speed. Yes, you do have to give them back if she dies, but she's still a good outlet and control piece.

She can burn away creatures and buff herself for commander damage wins. Basilisk Collar and Quietus Spike get a lot scarier in her hands.

I ultimately took her apart to build something more silly with Etali, Primal Storm; but had a blast while she was at the table.

Aura thief is currently still in I will sub out for Kels, Fight Fixer or Olivia Voldaren

Helm of Possession sac outlet for 2 with the steal

Keiga, the Tide Star a little high cast but with haste I can kill each turn and get the steal

Reins of Power ok I think this has significant multiplayer opportunity. I swap prior to combat attack the one with the most life sac all their borrowed creatures to make them permanently mine then I get back the stuff I loaned out.

Sower of Temptation flier with a steal ETB