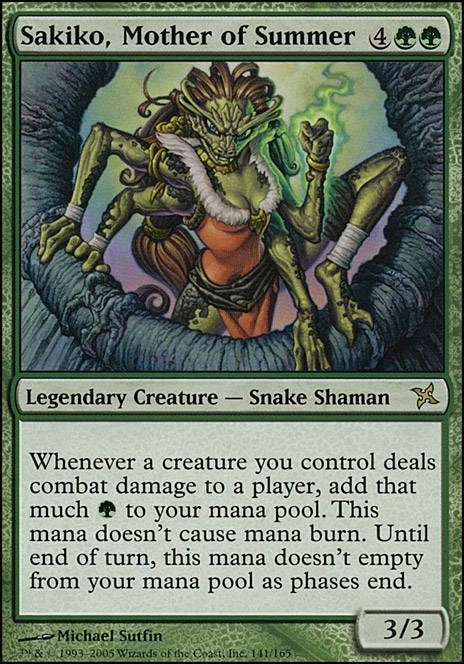 Sakiko, Mother of Hydras
by draigenaid

Sakiko, Mother of Summer
by floresjc33

The Cheating Green Monster
by freezerboy 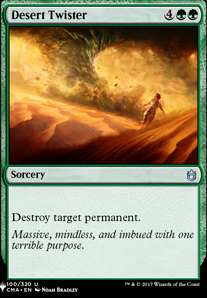 Sakiko, Mother of Hydras
by draigenaid

You could add Sakiko, Mother of Summer and Mark of Sakiko To help with any ramp, even though you don't seem to need it. Thanks for giving me some ideas for my deck, I'm just not sure I want to focus on defender creatures.

Nice episode as always and always a joy to listen to in general, even Andy's boy made an appearance in the background :-). Since you run a bunch of X Hydra's in de the deck an extra "neat-move" could be Mark of Sakiko or Sakiko, Mother of Summer for even bigger hydras!

Brago, King Eternal - flickers our defenders drawing us a card for each one if arcades is out and also untapping them if you activated abilities or attacked

Edric, Spymaster of Trest - we will always have a few defenders out attacking and drawing a card for each one will ensure we keep a hand full of defenders to play

Sakashima the Impostor - strictly a copy of arcades, removes the legendary text on it so they can both exist on the field at the same time drawing us 2 cards per defender and allowing one of them to be destroyed and still have redundancy

Sakiko, Mother of Summer - whenever you cast this card it will be free after combat due to all of our attackers having 3+ toughness to attack with, if we deal 6 damage (extremely easy) then its free, any more damage than that sets up our main phase 2 so we can flood the board

Sakura-Tribe Elder - early game ramp, vital for this deck, you need your commander out by turn 3 at the latest

Tomorrow, Azami's Familiar - basically changes our commanders text to read, whenever a defender enters the battlefield, look at the top 3 cards of you library and pick the best one. this allows us to not stall when going for the win due to the crazy amount of cards your looking through (this card could be cut due to how long it can take when drawing a lot of cards, people don't like to see that happen)

Trophy Mage - with wild pair in the deck a lot of cards total 4 when u add the power and toughness, this is a 2/2 so it falls in that category// this card allows you to win 1 turn early with the wild pair method because you can grab thousand-year elixir, giving activated abilities haste and allowing you to untap a mana producer ( this is also a flex slot that im still testing out due to low synergy with the deck as a whole because its not a defender and im only running 1 3 cost artifact.)

Looks good, but Karakas and Rofellos, Llanowar Emissary are both banned in EDH. I'd suggest switching Rofellos for Omnath, Locus of Mana to help make the most of Sakiko, Mother of Summer and Shizuko, Caller of Autumn if you don't spend all of the mana generated by them

Omnath, Locus of (a lot of) Mana

I have a Omnath-deck aswell, and this looks great, I'll save this for some inspiration when it's time to make my second Omnath deck (there are too many great cards for a deck like this that I am actually considering building two).I think you should SERIOUSLY consider putting Patron of the Orochi in your deck, I LOVE that card. Everytime I play it I have this really smug smile on my face 'cause it can be so disgusting if it isn't removed very quickly. It's basically a Seedborn Muse but cheaper (sure, not as good, but good enough). Observe that Patron of the Orochi untaps itself, therefore you can use it on each turn.I also love Sakiko, Mother of Summer, but I don't know if it'll fit in your deck, depending on how much mana you want.