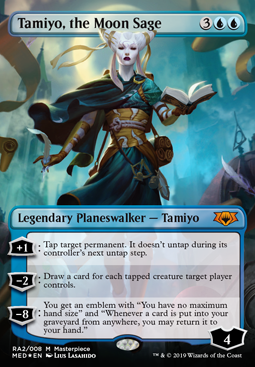 +1: Tap target permanent. It doesn't untap during its controller's next untap step.

-2: Draw a card for each tapped creature target player controls.

-8: You get an emblem with "You have no maximum hand size" and "Whenever a card is put into your graveyard from anywhere, you may return it to your hand."

The Tamiyo Project II: Mono U Aether Flu
by ANemoAcids

Surprised there aren't more planeswalkers. Most lists I've seen are including Tamiyo, the Moon Sage , Tamiyo, Field Researcher and Jace, Architect of Thought all of which are boarder line game winning with Deepglow Skate . Granted, I'm glad you're more creature focused but threat diversity can definitely warp more games in your favor.