When Iname as One enters the battlefield, if you played it from your hand, you may search your library for a Spirit permanent card, put it into play, then shuffle your library.

When Iname as One is put into a graveyard from play, you may remove it from the game. If you do, return target Spirit permanent card from your graveyard to play. 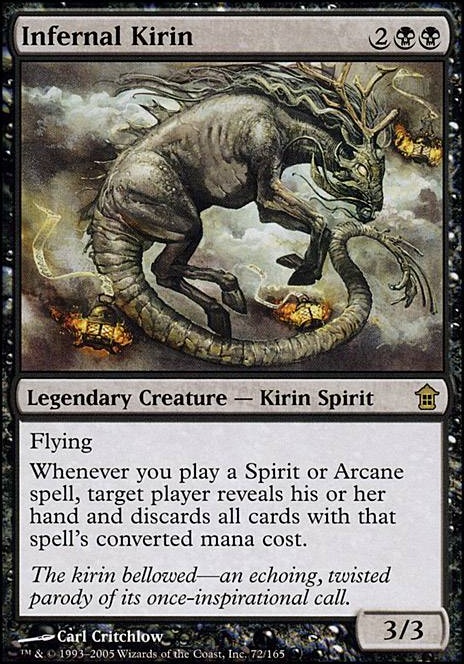 A Treefolk Made of Houses
by Wiggyman

Nostalgia For Kamigawa
by XiouGamer 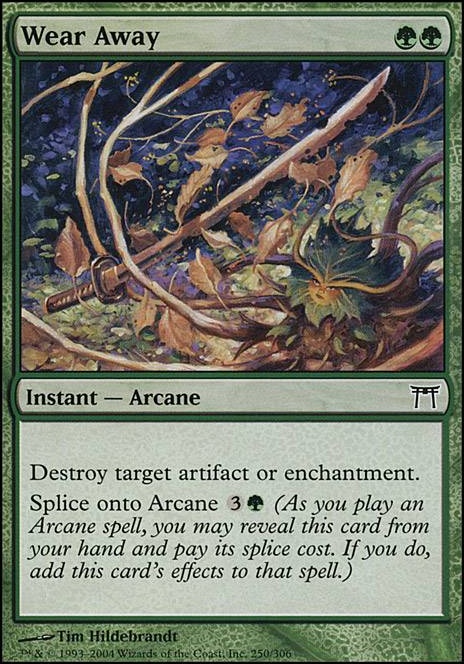 Killing in Iname of
by MattiueClemente

Studio MTG presents... Spirited Away, the Movie
by Idhagenow

Iname as One Discussion

Actually, Fellin22, there is one multicolor legend from the entire Kamigawa block; that being Iname as One . Starting to get why the legendary mechanic had to be reworked in Dominaria...

(I'm resuming my development of a deck in regards to Morph...)

(But a heated debate goes to Worldfire (I know it's banned, but it's true...) Level Destruction...)

Uh, well... after an overnight mild lack of slumber, I didn't know this question would go crazy on this scale. Now I wonder if Gerrard, Weatherlight Hero can still do what the question asked initially, & since we've recently put Iname as One on the table, is Gerrard capable of the same rulings mentioned above as Iname as One ? If what everyone say otherwise about this Gerrard is true, Ah well. I tried... X/

@Yesterday It just so happens that the Gatherer page for Iname as One has the following rulings note:

4/15/2013 In a Commander game, you may send Iname to the Command Zone instead of exiling it during the resolution of its ability. If you do, its ability still works. Iname's ability only requires that you attempted to exile it, not that it actually gets to the exile zone. This is similar to how destroying a creature (with, for example, Rest in Peace) doesn't necessarily ensure that creature will end up in the graveyard; it just so happens that the action of exiling something and the exile zone both use the same word: "exile".

If you take an action but a replacement effect changes the result of that action, you still took the action. This is why, for example, Rest in Peace doesn't shut down activated abilities with "sacrifice a creature" in the cost. The game's definition of "sacrifice" is "To move a permanent you control to its owner's graveyard". If you sacrifice something while Rest in Peace is out and it moves to exile instead of the graveyard, you still sacrificed it.

In your Baral, Chief of Compliance and Tomorrow, Azami's Familiar example, you do have to discard a card.

@Rhadamanthus: That's... not true? Otherwise, Iname as One would be... slightly less awful as a Commander.

~ cannot attack or block unless you control at least 2 other spirits, and have at least 2 spirits in your graveyard.

Other Spirits you control have soulshift X, where X is the spirits converted mana cost minus 1.

~ cannot attack or block unless you have cast 2 or more arcane spells this turn.

Whenever ~ deals combat damage to a player, return target spell with arcane from your graveyard to your hand.

based on The Unspeakable and Iname as One

Okay, this is epic

I love the idea of Iname as One being useful outside of hard casting it, +1 from me.

I think, more than ever, we should just get rid of those silly definitions. People keep throwing them back like they're gospel.

It was (supposed to be) an easy way to define and distinguish the hierarchical structure set in EDH. But this has become more problematic recently, with users trying to manipulate the definition as if that's what people look at first when defining the tiers, and not the inherent strength of the Commander, and the deck it's best known for.

So here is a solution, to hopefully curb any regurgitated copypastas of the definitions from hereon in:

There should be no confusion, no buzzwords like "suffering the aggro problem" since there are combo decks in Tier 3 that just aren't as fast or as reliable as combo decks higher up, or combos that rely on too many pieces.

This list isn't to show every user or lurker on the internet that every commander is totally interchangeable. That's a waste of everyone's time. It's to document the best possible list for the commander, the best possible commander for the list, and the agreed upon archetype that best suits both. Period.

There's no argument nor sensible discussion to be had when you try and claim the tiers don't matter past a certain number. The tiers themselves are arbitrary to begin with; we could make it 10 tiers if need be, with 0.5 marks in between. 5 just seems like a sound starting point, as people ought to understand the fundamental difference between 1 and 5. The 0.5 inclusions were recently added, because it was agreed upon that certain decks felt better than 2, but less than 1.

The point is, there is a hierarchy; that's inarguable. The cream of the crop sits at the top. As you move down the hierarchy, you also (presumably) decrease in speed and consistency, and to some extent, archetypically. There are other factors to consider as well.

But to claim that 60% of the tiers are completely irrelevant implies that you think there's no discernable difference between something like Adun Oakenshield and Iname as One - which is patently absurd.

Itâs a tough hypothesis to prove as some universal truth though.

An Ad Nauseam Zur deck will be objectively worse if Zur wasnât in it.

Food Chain Tazri will be objectively worse if Karona were the commander and Tazri just appeared in the 99. The resiliency of the deck relies on Tazri.

Yidris storm becomes a pile of cards if you swap it for Silas Renn and Tymna.

I donât think your testing is very academic, mainly because ânearlyâ 100 still doesnât seem like a lot; I could jam 100 fun games into a weekend dedicated to EDH. Itâs also guilty of a logical inconsitency that proving a deck âcanâ win if it has a terrible Legendary doesnât disprove the potency of strong Legendary Creatures.

For this to work youâd need thousands of tests among every single legendary, every popular archetype, and the win/loss ratio differences if you substituted a commander for anything else.