6BB: Monstrosity 3. (If this creature isn't monstrous, put three +1/+1 counters on it and it becomes monstrous.)

When Hythonia the Cruel becomes monstrous, destroy all non-Gorgon creatures.

hythonia the cool
by meME12 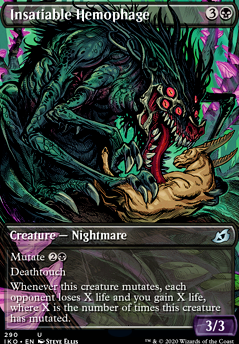 Considering the Gorgon Tribal Commander is Hythonia the Cruel , yeah, it's a weak tribe.

Other Gorgons you control have +1/+1 and Trample

Sisters of the Stone Death was the original legend.

Animation Module - Missed out on that one, great idea

Blade of the Bloodchief - I feel as though it's not gonna be used to its full potential most of the time, since, while Vish Kal likes counters, this deck isn't a counter deck that much.

Walking Ballista - Maybe, but I have reservations about adding it since I can't really see myself ever using the ability to gain more counters, so it'd enter with x counters and id either sac it to Vish, or use it all up to blast someone.

Kalitas, Traitor of Ghet - Already in.

Endless One - Similar reasoning to Ballista

Hangarback Walker - Definitely can see it being useful, though I worry I'll never really cast it for a high enough x to get that much out of it

Hythonia the Cruel - Too expensive really, trying to keep the cmc as low as possible

Karlov of the Ghost Council - Lifegain is just a byproduct of the cards in the deck, I might actually make it less lifegain oriented, so while he can be great removal, I don't think he'd be that useful. Might take a bit more consideration to full decide

Krav, the Unredeemed - Not really sure about him, maybe board for now

Maga, Traitor to Mortals - Would be way to expensive to cast to get a significant amount of life drained, can only see him being played late game to get that final bit of damage in.

Marionette Master - While a great card, I don't have any ways to sacrifice artifacts, so her ability is moot

Mikaeus, the Lunarch - Not a counter deck

Thanks for your suggestions. I think I should refine the objective of the deck a bit more and appreciate your assistance, WarriorMagic

Commander's Sphere is super cheap right now. Same with Darksteel Ingot, Leaden Myr, Everflowing Chalice, Astral Cornucopia, Corrupted Grafstone, Guardian Idol, Phyrexian Totem and Worn Powerstone. there are more (My LGS goes by tcg prices so that's what I use). If you wanted to make Hythonia the Cruel deck then maybe add a couple more gorgons. The ramp cards I suggested should be auto-includes once you get your hands on some money.