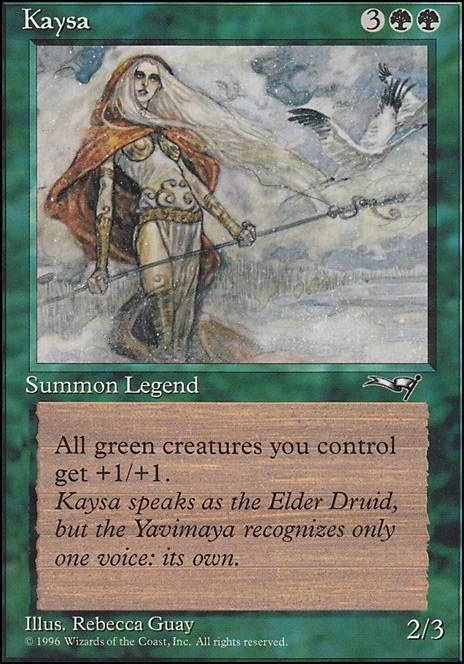 Green creatures you control get +1/+1.

Screw you, its a bunch of Leprechauns
by goose7699 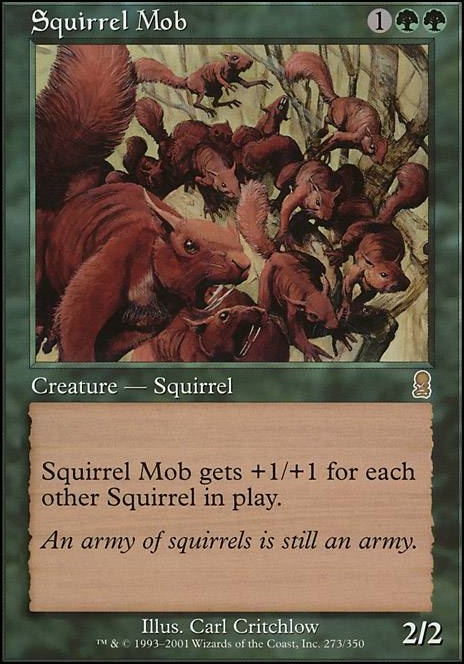 This Deck has Nothing to do w/ the Commander
by kamelyan

I love my mono green elves it was my first EDH deck sometimes I swap the commanders around just for fun.

Ezuri leader of the woodelves

Ezuri leader of the woodelves

Wren's Run Packmaster out /sad face no more wolves Kaysa in the oracle text says she is a druid, elf and her +1+1 works on her self!

Nath of the gilt leaf edh

Nice deck! As a long time elf deck player I always thought this would be a fun commander. Repeated discard is very powerful and so is a steady stream of free tokens, seems great. Got a few ideas for you.. Elvish Guidance, Kaysa (who is also an elf), Geth's Grimoire, Cursed Rack, Slate of Ancestry, Freyalise, Llanowar's Fury, and Smokestack ;)

You might want cards to stop boardwipes, as attempting to repeatedly cast Progenitus from your command zone seems like an inefficient gameplan.

Saskia the Unyielding would provide a good alternate plan in your deck, as if Progenitus suffers an unfortunate fate you would still be able to wreck someone's face.

As for cuts, Juniper Order Ranger seems a little iffy. Your deck doesn't really run enough +1/+1 counter cards for that to be efficient (Crusade, Nyssa, and Ancient are likely not enough). Mana Flare should replaced with Mana Reflection if you want a mana doubler. Meteorite doesn't seem very efficient for its cost. Kaysa is probably your worst anthem effect, considering cost and range. Glorious Anthem doesn't feel very impactful, especially when compared to alternate cards like Always Watching .

I love the deck though. Wish I could afford it :/