Varolz, the Scar-Striped occurrence in decks from the last year varolz the infected
by eel218 The Graveyard Shuffle
by RichterStorm varolz, the scar-striped
by snakeandsin 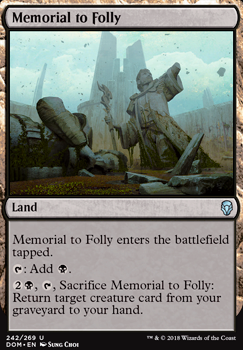 I am so glad to see Project Melira alive and well. :)

For me personally, I would take out Hexdrinker and Carrion Feeder in favor of Wall of Blossoms or Wall of Omens.

Murderous Rider is a bit mana-hungry. I personally prefer Mindslicer in order to hose control decks.

Kor Firewalker is an easy way to hose red decks, which usually gave Melira builds the most trouble (and are more popular online than in person).

I personally prefer Gavony Township over Castle Lochtwain. You don't really want to cause yourself to lose life. Your opponents will do that for you regularly enough.

You probably won't play much of Wheel of Sun and Moon....for a better multi-colored option to wish for, try Varolz, the Scar-Striped

Flash is a powerful card for this combo because it basically does steps 2-4. The large amount of creature/general tutors in Green + Black means step 1 isn't too hard either.

There are already decks that exist without Flash as the Hulk mechanism though. These decks are much more "all-in" than FlashHulk, because you usually have some part of the Hulk equation in the command zone. The GB Varolz, the Scar-Striped hulk deck is a great example of this. Leverage high density of creature/general tutors in GB to find Hulk. Leverage high density of 1 or 2 CMC discard outlets in Black to pitch Hulk to GY. Leverage high density of 1 or 2 CMC reanimation pieces in Black to reanimate the hulk. Have sac outlet in command zone to complete the puzzle. Also yes with the proper draws you can hit this combo turn 1 or turn 2, but the important part is that its pretty damn consistent by turn 3.

While a deck like that is much more all-in than FlashHulk, its still blisteringly fast and consistent because of Hulk. Other cards like Survival of the Fittest help the consistency greatly and enable the strategy, but once again Hulk is the fatty payoff that leads to wins.

If you ban Flash , you're just asking for the current Hulk deck to be replaced by another Hulk deck. Maybe the delivery method is Razakats instead of Flash. Big whoop. Its the same deck with a new coat of paint. Ban Protean Hulk and lets bust this meta wide open.

As for Demonic Consultation and Tainted Pact . Yeah I'm totally fine with them getting banned too. Labman + Consultation combos can go into and UBx deck, and just like Hulk they really aren't very interesting once you seen it once. I'm not really itching to see them banned though.

Honestly if you want a deck to grow with you, Meren of Clan Nel Toth is easily one of the best commanders to start with. It makes your deck very resilient and forgiving to your mistakes as a more casual/beginning player and later can be upgraded to a competitive level.

Another one that is relatively good casually and has a high ceiling for growth is Varolz, the Scar-Striped . His abilities can make for quite a few types of decks including aristocrats style (sacrificing creatures for value), voltron style (making your commander as big as possible), or even playing huge creatures to either reanimate or scavenge. As you get into the more competitive realm he becomes a Protean Hulk deck that can win pretty wickedly fast despite not having access to Flash .

No doubt The Gitrog Monster is the strongest gb commander competitively, but I would advise you avoid him like the plague as a new player. He takes a lot more knowledge of the game and of his specific strategy to be any good. Wait to play the frog until you are more comfortable with gb cards and have done some studying on how the deck works and it's strange but extremely effective win-cons.

(CAUTION: A Huge List of CMDRS dead ahead. If you can't comply, remember that I apologized for the huge wall.)

Well, I was just told how to do a Folder, but to choose what for decks is another thing entirely. Especially if such decks are either:

A: What Everyone Plays B: Are good, but have since been outdated by a year C: Are Tribal Leaders in a Specific Sense (No Morophon, the Boundless please.) D: Not Underdog CMDRs. E: Other.

Let's Just assume we use that cEDH Deck Tier List One-by-One; but w/ a new rule for Playtesting such decks so none of the cEDH Decks win out of overall ratios ~100% of the time; CHANNELFIREBALL-style. That said, From using the Tier List, I require the following CMDR Decks to not have cEDH Level Power, but are these:

The First Sliver (Not as a Sliver Tribe Leader)

(NOTE: Unknown if Kraum, Ludevic's Opus & Vial Smasher the Fierce need to be Parters to be of this level.)

Baral, Chief of Compliance (Get your Counterspells Ready!)

But, yeah, you get the picture, right? Since I can't find such decks on my own to put in such a folder for decks worth testing against your own. Rules are as follows though:

I know this is too much for now, but I'm making a folder for Playtesting w/ decks as everyone kept telling me to do so; now I want to hold my end of the Bargain. But I seriously need help from you to do this. If you can find any decks here to add to such a Folder, put it on the comments below.

(& no, It's not like it's a personal thing! Anyone is allowed to use it when it's finished!)

I tried building a Skullbriar a while ago, couldn't get it to kill fast enough on his own. But had a lot of success with Scavenge using him. Varolz, the Scar-Striped lets you scavenge Skullbriar when he is in the graveyard to beef up your other threats for only , then you can put him back in the command zone and cast him again. While Varolz is out you can also scavenge your other dead threats onto Skullbriar to beef him up quicker, like Death's Shadow which is a crazy buff for just .

Also you need more ramp to get to the lightning speed you want this deck to run at. Its all well and good playing your commander on t2, but its kind of terrible unless you get enough mana by t3 or 4 to pump him up to crazy levels. Ditch some of your slower and more unsuccessful cards and put in some more ramp and mana rocks.

I feel like Varolz, the Scar-Striped should definitely have a place in the mainboard. it kind of doubles the number of Phyrexian Dreadnought 's. a 12/12 for 3 mana is still very good.