Whenever you cast a red spell, untap Chandra, Fire of Kaladesh.

Chandra, Fire of Kaladesh deals 1 damage to target player. If Chandra has dealt 3 or more damage this turn, exile her, then return her to the battlefield transformed under her owner's control.

Chandra, Fire of Kaladesh occurrence in decks from the last year 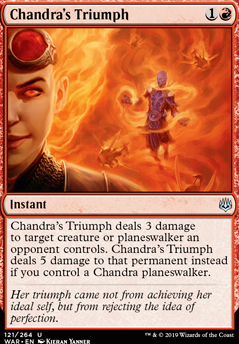 Argy on What have you been playing?

Epidilius I go with Chandra, Fire of Kaladesh  Flip in my deck.

It's not unheard of for her to deal 9 damage in one turn.

TypicalTimmy, I disagree. I donât think end step proliferating makes the deck. And if Atraxa is taken out of the picture by opponents (loses abilities, consistently bounced or countered, becomes too expensive due to command tax), your whole strategy falls apart. Itâs also a bit slow, as it takes a few turns for her effect to really make a difference. I can agree sheâs a good option, but I donât think sheâs the best. More efficient/reliable options in my opinion include Ramos, Dragon Engine , Will + Rowan, Elsha of the Infinite , Kykar, Wind's Fury , Chandra, Fire of Kaladesh  Flip (for Chandra tribal), and even Kethis, the Hidden Hand .

Does Mind Stone serve a purpose in this deck? Arcum's Astrolabe is an iffy inclusion, but it ups your snow count for... really, you're putting in an entire snow theme just so you can play... Skred ?? Lightning Bolt can deal with pretty well anything that isn't in a tron deck, and Bolt can also, importantly, target an opponent!

Moving past that, Chandra, Fire Artisan would be a really neat inclusion into your little suite of planeswalkers, as might Chandra, Fire of Kaladesh  Flip or Saheeli, Sublime Artificer for more midrange/controlly matchups (people don't usually even sideboard planeswalker removal, and gumming up the board it not something that blue/white or jund wants to see!)

Very nice deck. Have you considered running a Jokulhaups or Obliterate package? They work really nice with planeswalkers, even if they are not good in making friends.

If you like planeswalker combos, you can use Cloudstone Curio . It combos with the new Planebound Accomplice and Chandra, Bold Pyromancer or Chandra, Torch of Defiance . And it also combos with Koth of the Hammer if you have enough mountains.

I am trying to build a similar deck to yours using Chandra, Fire of Kaladesh  Flip at the helm, but I am focusing more on global destruction at the same time that she transforms. I will use a lot of suggestions of your build. Thank you!