: Choose a creature card at random from target opponent's graveyard. Put that card onto the battlefield under your control.

Tariel, Reckoner of Souls occurrence in decks from the last year Wrong side of heaven / righteous side of hell
by schsowl77

Angels and Demons
by uselessbyname 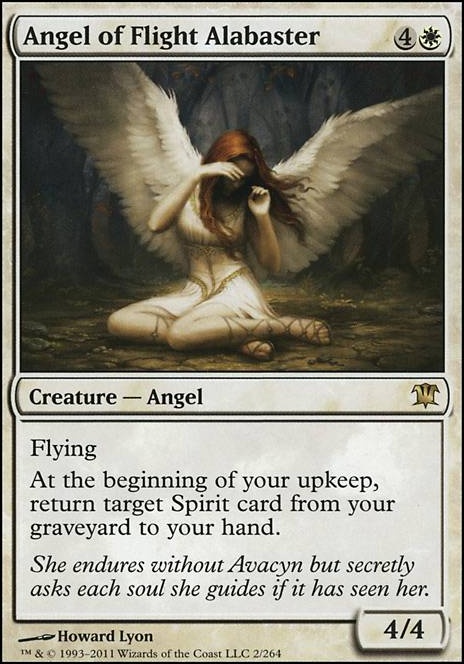 Kaalia, by Matt
by Fujjji

DemonDragonJ on What Creature Should Replace Teysa, ...

After much deliberation, I have decided that I shall put Vona, Butcher of Magan into my red/white/black and black/white/green decks, because the generals of those decks ( Tariel, Reckoner of Souls and Teneb, the Harvester , respectively) both steal creatures from opponentsâ graveyards, and Vona will help to put creatures in those graveyards, initially. I shall put Kambal, Consul of Allocation into my black/white/blue deck, because his âtaxingâ effect shall fit better with the control theme of that deck.

@Yesterday: Sounds odd, considering the folder this deck got is [Not My Commander]; is it truly unique that this can never be replicated by another to the point of an awesome idea? Or does the deck really suck by the standards of that folder? Well... In any case, Thanks for supporting this deck thus far. I really didn't think this would be good compared to my other scrap creations.

For Worldgorger Dragon : The combo mentioned seemed more like a 50/50 shot. A literal Flip of a Coin that decides whether you stay alive; or even Tariel, Reckoner of Souls would never merit you an afterlife; much less pure darkness in which you look as if you're a part of it, even in First Person View. Or a White Void that is unbound by reality itself; simply put 0D; No Wall, No Line, Not even a Point. Sorry to say, but that Dragon get's the cut.

I'd like some idea for a Doomsday Package; but, I'd rather not include Lion's Eye Diamond ; only one deck that's still a WIP of mine deserves a place there. Just rest for now though; know that I did at least cut something...

Once again, dbpunk, itâs well more interesting to ask whether Kethis is better or worse than our previous âlegend tribalâ commanders; the Sisays. Kethis and Karador play so differently- Karador trying to grind out consistent value and Kethis looking to win the game at least most of the way in one explosive turn.

Iâd say, my personal verdict, is that Sisay, Weatherlight Captain may be my favorite of the three, as it finally allows me to play Arvad the Cursed alongside Tariel, Reckoner of Souls and Edric, Spymaster of Trest . Why?, that seems ridiculous! Does it? Two words; Legendary Politics/Kingmaker.

It's hard to say the exact numbers of which type of card but a rough estimate could be:

8 ramp pieces - 2 cost mana rocks that generate multi colour should form the majority of this. This is with the aim to get KTV out turn 3 or ensure that she is out turn 4 after a protection or haste piece is dropped turn 3 protection. I would recommend the three signets, the three Talismans, Fellwar Stone , Coldsteel Heart . This is key, Swing with kalia a turn earlier makes her harder to deal with.

8 Protection pieces - as multimedia stated, in this case this should include any creatures that offer protection.

27 Creature bombs - this is where the deck can get very pricey generally the ridiculous cards that if dropped turn 4 can be silly are expensive $$ but budget versions can be used to devastating effect. It will be easy to find the expensive ones but the cheeper ones are Reya Dawnbringer Angel of Serenity Angel of Despair Tariel, Reckoner of Souls Archfiend of Depravity ...

9 high synergy cards - Haste enablers should be in here (unless they also offer protections),cards to enclude could be Strionic Resonator , Helm of the Host , Dragon Tempest Fervor Whip of Erebos Unburial Rites ...

I think the first question to ask is: Which Walkers should be cut? What is better: Aminatou, the Fateshifter X Venser, the Sojourner ? How do I incorporate Flicker effects w/o Felidar Guardian for simpler & more compact combos? Do Tibalt, Rakish Instigator , & The Wanderer do too little here as well, & if so, what other Static-Ability Walkers also deserve the cut? & is Vraska, Golgari Queen really that bad?

Question 2: What would you cut for something else non-walker based? Is Niv-Mizzet Reborn a better 5 color CMDR for Superfriends? What about Najeela, the Blade-Blossom ? In honor of his memory & sheer badassery, what would be the best Gideon "GJ-Combo-Finish-Man" Jura for Superfriends? I really would like to add one here.

Question 3: Crucible of Worlds is here for the Tap Fetches, & Cycle Duals to use over & over. But should I replace the BFZ Duals for the Shocks of the same identity each?

Question 4: Can you think of any better options out of the 43 needed to be cut?

Question 5: Since we're dealing w/ stuff that's no longer just Doubling Season , what would you recommend for alts; or even stuff that Proliferates crazier that what's in the current slate?

Question for fun: I was told my Primary Mana Color is for my raw emotion, & rarely having any real fun; that & considering is known as the color of "The Lovers", is attracted to even cute Anime girls in ways that make me want to make a Waifu Army. But I also stated I had a secondary Mana Color: . Narset, Parter of Veils is stated consistently as part of the Autistic Spectrum (I myself am slightly Aspergian.). My intelligence is stated to even be that of a madman, blurting out whatever is in my mind, be it ideas, or just mere non-canon fantasies. I also believe "Progress" can apply to everyone; Serial Arsonists, Tree Huggers, 911 operatives, even those who believe Paradise, Damnation, even Tariel, Reckoner of Souls is truly an existing part of reality; heck even my Anime-Ichorstained mind might even believe Cray of Cardfight Vanguard might even exist; most likely outside our Universe but it's still possible.

So this means I'm currently . Izzet League Level Madness. Is it possible I might have a third color of an amount so small, I still dunno even?

2nd Question for Fun: The Wanderer is stated to require Kinetic Energy to make her more powerful. Since Kinesis is the use of Kinetic concept; does this also apply to other kinds of Kinesis' as slight as even Hydrokinesis (Water Control), or even as powerful as Photokinesis (Light Control)?

Alright, we have some starting questions. I'd appreciate some answers for some ideas please... Fire or trigger away, please. ^_^

The Legend of Saskia

Back in My Day They Were Just Creatures!

Those Who Forget History are Doomed to Lose to it.

Saskia: the Stuff of Legends

Big Sassy's Legendary Horde (note: Big Sassy as a nickname for Saskia can be used in any of these names)

History Has its Eyes on You (it's a musical reference, if you don't get it)

That's all I got for names- this one was tough! Now, suggestions:

Flip is a good body, Mirri, Weatherlight Duelist is good protection, Ravos, Soultender is good recursion, Rhonas the Indomitable is good but you'll have to see if you like God-Eternal Rhonas better (I like OG Rhonas better unless your repeating God-Eternal's ETB), Sek'Kuar, Deathkeeper is good block deterrence, one of the Tajics ( Tajic, Blade of the Legion or Tajic, Legion's Edge ), both are good bodies, Tana, the Bloodsower is good body + chump blockers, Tariel, Reckoner of Souls is good recursion, Varchild, Betrayer of Kjeldor is good fun, and Zurgo Helmsmasher is a surprisingly fun political piece.

Also, I'd really recommend you include planeswalkers, and also you're running two Selvalas and two Odrics.

@AlwaysSleepy: Thanks. Based on such a combo, I guess the only replacing card I'd use to replace Night's Whisper is either Tormenting Voice or even Wild Guess ? All three have a CMC of 2, or am I missing out on something? I'll have to check to comment to be sure...

Hmmm... it seems as if both replacements just require a single discard from the hand, & the rest is in the clear; much like how Night's Whisper works for this combo. Might as well have an extra card to discard for either Rummaging Replacement. So, yeah. Thanks very much, sir; after a lot of such I've been through; I think it's about time I start my Mardu deck project. But what the heck to use as a CMDR of such design? Queen Marchesa is good, but not what I'm looking for. Zurgo Helmsmasher is ridiculous on its own, but still not what to use as Voltron (Not what I want.), Oros, the Avenger ? nope. Tariel, Reckoner of Souls ? Chaos (This really deserves a symbol here for commenting, & other things of the like. Same for the Planeswalker Symbol on the Same Planar Die.) so far is too hard to control, & is potentially better off as something else entirely that's NOT Angel Tribal. Kaalia of the Vast is more akin to Mayael the Anima as they tutor for very powerful creatures w/ crazy effects. Not much closer. Not going to allow anymore Partner duos. Ol' Edgar Markov means a no can do for me; Eminence was never going to last long enough anyway. Licia, Sanguine Tribune just wants to feast on blood at an extremely huge mana cost, but this deck has little to nothing about life gain. One option remains: Mathas, Fiend Seeker . I wonder how he can truly work... Thanks again! ^_^

BMHKain on Several things; & some questions ...

@SynergyBuild: Lulz. Never thought I'm saying this, after I found how a damned Accordion works here, I had to decide to do something like this as a Wincon in (Mardu). Though what CMDR to use is something I still dunnoâ¦ Not Counting Mayael variants Kaalia of the Vast , or Aggro Zurgo Helmsmasher , Vamps w/ no support for this (Any Mardu CMDR of C17's Vampire Tribal.), Weenies Alesha, Who Smiles at Death , much less Aikido Queen Marchesa . Same also goes for Partner CMDRS. One Wincon in question allows Doomsday , but I wanted an all Package. I wonder what I can use for this; as I've little options; maybe Mathas, Fiend Seeker could be good? Tariel, Reckoner of Souls ? I doubt Oros, the Avenger will do anything... Ideas?