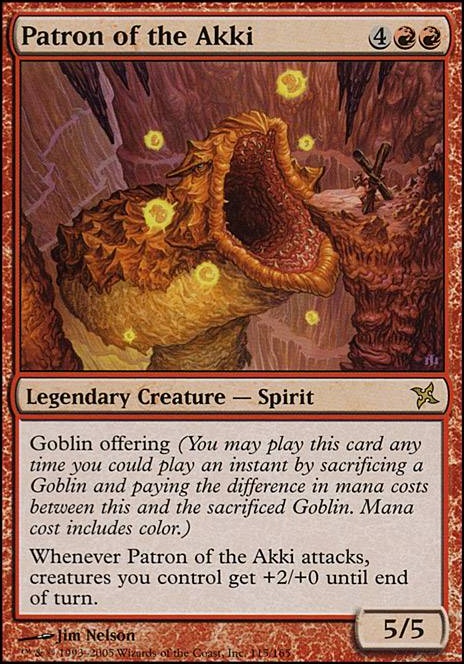 Patron of the Akki

Goblin offering (You may play this card any time you could play an instant by sacrificing a Goblin and paying the difference in mana costs between this and the sacrificed Goblin. Mana cost includes color.)

Whenever Patron of the Akki attacks, creatures you control get +2/+0 until end of turn.

Patron of the Akki Extreme Budget EDH
by roboduckie01

Down, Down, To Goblin Town ....
by BritishBulldog97

Mileva, Champion of the Tenth (Custom Commander)
by seshiro_of_the_orochi

Patron of the Akki Discussion

NOTE: Gob = Goblin. You'll be seeing this a lot.

Q1: Unless you don't want to be entirely on theme w/ Gobs, & Artifice, any Gob/Gob Support that can damage flying creatures? Any others that can take to the skies?

Q2: Mana Rocks in Mono-Color include Arcane Signet , Coldsteel Heart , or, if in a Pinch: Commander's Sphere . But are there any Color-Neutral Options for the Fire Medallion|Medallions?

Q3: There are so many Gobs, Tech, & Daretti that have use. However, some are worse than others; often by a lot.

This is not just a Gob Tribal led by Krenko, this is also an Artifice Deck. Any suggestions for adds that benefit Gobs and/or Artifice, or cuts if otherwise?

Q4 FINAL: Final problem; a Lack of good Instants in Mono-. Any Gob-friendly Instants that don't need to burn something?

I hope these questions help. I just want constructive criticism, that's all. Later.

Hello, I'm getting an issue where my deck changes are not being reflected properly. Below are steps to reproduce:

Actual Output: System responds by showing the main deck page with Custom tag grouping but Deck changes are NOT reflected as according to the change made in Step 2 above. Card that was removed in Step 2 still appears, and new card that was added in Step 2 does not appear.

Feel free to let me know if I can provide any additional information.

TypicalTimmy: I imagined Tasazashi as a giant orange scaled beast that chars everything in its wake. Try to imagine a mixture of Patron of the Akki and a japanese giant salamander the size of an Aetherwind Basker . I guess he or she could also havebeen an Elder Salamander.

Patron of the Akki is often overshadowed by Marton and Zada, but boy is he janky and fun.

Run Krenko, Mob Boss and lots of low cmc goblins and goblin token generation like Goblin Rally, with a finisher of Clickslither with Fling or Patron of the Akki and Goblin War Strike. It gets nuts, fast. Keldon Warlord likes this deck as well

CaptSillva I do see your point about Goblin Charbelcher for this deck build at least. In mine, it's more built for just slamming an opponent if I run out of options. I do run a little more mountains than he does. As for Raging Goblin I still like him in a deck just because if he is in your opening hand you can at least get a goblin out and rolling even if he hits for 1. I do have to say I do prefer my deck build since I know what it can do. I might have him still in but can't remember if off the top of my head. As for Patron of the Akki I do see your point although instead of sacking the commander I would rather sack a token, more punch for the price.