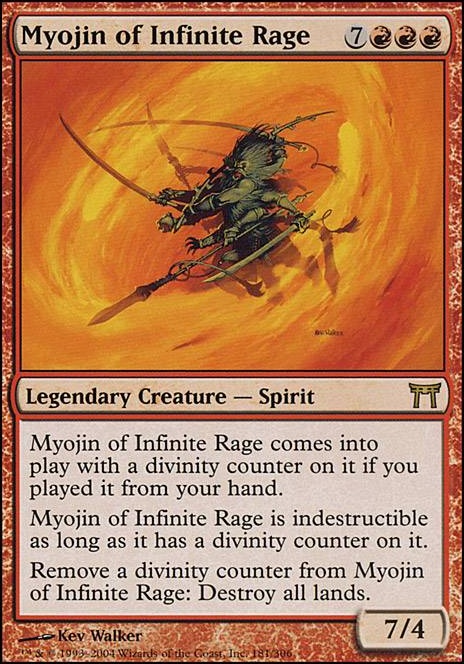 Myojin of Infinite Rage enters the battlefield with a divinity counter on it if you played it from your hand.

Myojin of Infinite Rage is indestructible as long as it has a divinity counter on it.

Remove a divinity counter from Myojin of Infinite Rage: Destroy all lands.

It's not made to win #2
by AncestralCupid

Hatred is My Weapon
by ZtheGreat

Lands? Who Needs Them? ã  (Suggestions Please)
by z2aaa 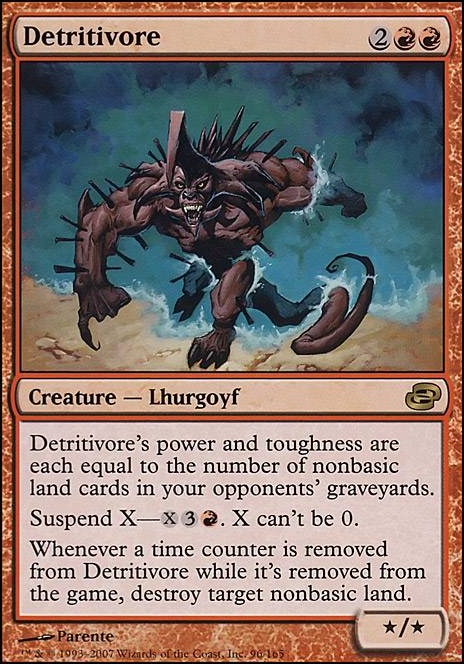 How to Prevent an Infinite Combo...
by StumpyIB

Lanzo493 thanks for the feedback.

I think you're right about Where Ancients Tread . I'm going to swap these out.

I didn't include Myojin of Infinite Rage because my playgroup would be pretty annoyed. I'll likely pick up a copy to have on hand in case I need to punch up the deck.

As for Sundial of the Infinite , I have it in my maybeboard, but I've been going back and forth on whether or not to include it. Most of my creatures have strong ETB effects that I would like to repeat, and I think my creature count is a little low. I'm OK with the lower creature count because I am reusing them from my hand. If I add Feldon of the Third Path , then Sundial absolutely goes in as it will have multiple applications.

I prefer Warstorm Surge over Where Ancients Tread because it's almost as strict upgrade. If you're okay being mean you can play Myojin of Infinite Rage . It'll almost guarantee you victory. Illharg loves extra combats. I would suggest running a few. World at War and Savage Beating seem pretty useful.

Illharg plays very similarly to Feldon for the most part. You can check out my deck Feldon Never Gets Any Love to see what I mean, but here's one key interaction they share with Sundial of the Infinite . Because the tokens are returned to your hand at the beginning of the next end step, if you end the turn after that ability triggers and goes on the stack, that ability that would bounce your creature will get exiled as a result of the sundial ending the turn. It triggered once, so it won't trigger again. You'll get giant, free creatures for .

Unfortunately I don't think Myojin of Infinite Rage will get the divinity counter unless it is cast from your hand. Played was updated to cast, and if it enters from your commander's attack trigger it won't be cast.

Farel on Newbie needs help getting into â¦

I can't deny that Merfolk and their philosophy did fit me quite well. I overall like combo mechanics, powering up, and things like that.

Also, I wish to say that I do own some more rare cards, which could potentially be helpful for future upgrades of whichever deck I'd get: - Hinterland Harbor - Temple Garden - Clifftop Retreat - Azusa, Lost but Seeking - Myojin of Infinite Rage - Scion of the Wild - Earth Surge - Novijen Sages - Sensei's Divining Top

_Delta_ I cut Myojin of Infinite Rage , Carnage Tyrant , Splendid Reclamation , Sekki, Seasons' Guide , Ramunap Excavator , Garruk's Horde , and Praetor's Counsel . I have a sneaky suspicion that you suggested quite a few of those because of the "land destruction" flavor which really doesn't fit the overall theme of the deck. I can see cutting the mana-dorks...but I might add in Arbor Elf .

Hello, I thought I would lend a hand as much as I can for now. I will try to help more later tonight when i'm done with school/work. These cards below represent what I think you should cut, unfortunately however I don't have the time to write out in detail why I think all of these 13 cards should be cut currently, but I'm sure you can figure out some and I can try to explain these choices more later if need be.

As I have said, I will try to be of help later on when I can, but I do hope for now some of this is of help to you!