When General Tazri enters the battlefield, you may search your library for an Ally creature card, reveal it, put it into your hand, then shuffle your library.

: Ally creatures you control get +X/+X until end of turn, where X is the number of colours among those creatures.

General Tazri occurrence in decks from the last year 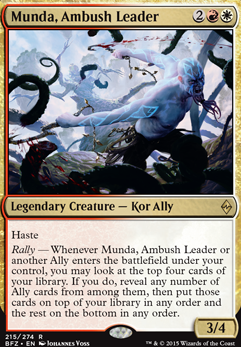 Hey Daechon, this is something I learned just in the last year. As long as the Commander has for an activated ability, you can build a deck of those colors because the Commander needs those colors to activate their ability. Another example of this is General Tazri and Najeela, the Blade-Blossom who are also mono-colored legendary creatures but have activated abilities, meaning they're 5 colors decks. So in reality, no rules are being broken at all and it's perfectly legal.

Dango: You should play General Tazri ;)

With Bumps gone, I just feel this deserves an Update...

I am at a status this needs a Part 3. But I have to ask before doing so (SPOILER ALERT: Part 3 WILL Happen no matter one; & it includes the Ravnican Comparisons (Even after WAR.), & what we got so far for Color Identity confirmation.): are you guys even interested anymore? I actually still am. I just need your help is all. Thanks for helping so far. & Caerwyn, I can completely understand the HUGE amount of Complications from 3+ Colors. I'm just trying to do 5 Personality Traits entirely for each Color Identity & nothing more/less. I just need help more than ever now... Thanks for all this. I just want more Traits, & less complications of Color Identity issues...

Thanks for all the help thus far. I didn't think we'd make to this far...

Oh, & if Ramos, Dragon Engine , Najeela, the Blade-Blossom , Jodah, Archmage Eternal (Who is technically /Jeskai.), General Tazri , Morophon, the Boundless , Golos, Tireless Pilgrim , Sisay, Weatherlight Captain , & now, Kenrith, the Returned King can all count as , nearly more than all other true 5 Colors, I really need more help than ever to complete this campaign. Who still wants to do this? (SPOILER ALERT: It won't matter if you say no... Eheheh...)

Oddly, clayperce, since I made this username several years ago, my favorite plane has changed dramatically, from Zendikar to Ravnica to Tarkir to, finally, Alara. If you're curious as to why, we should talk about it on my wall, not here.

Riffing off of your reprint quandaries, I wonder whether WotC is making an artifact subtheme in Zendikar again? Life, it's cool if they do, but I would kinda prefer that that be on the backburner, we get a couple reprints, like maybe Adventuring Gear , Stoneforge, and possibly Slab Hammer to more easily enable landfall. I would really prefer for us to get a new mechanic that feels adventurous (and no, while there's no way they're bringing it back so soon, Adventure would really not be a bad fit).

Well, fadelightningmm, I guess that's what I get for not looking on the wiki first. Still, it would be pretty bad ass if this was the plot to Zendikar rising- not using Rayami, but perhaps Ayli, Eternal Pilgrim . Narratively, the block would be a way for Zendikar to symbolically overcome its past. And by extension, of course, to truly and finally overcome the Eldrazi. Ayli's story would be that of someone who, when everything she knew was shattered before her, chose to cling to the pieces rather than moving on. It would be super cool if, rather than her death ending the story, she lives and learns to move on. Perhaps she even earns the respect of General Tazri sometime later, or the general decides to take Ayli under her wing in order to help her move on. Remember, that plays into Tazri's story arc quite a bit as well. The inability to move on is something that each of them has experience with, and learning to live with regret and make the most of it is a perinent message today.

Thanks for the quick reply ShaperSavant!

(CAUTION: A Huge List of CMDRS dead ahead. If you can't comply, remember that I apologized for the huge wall.)

Well, I was just told how to do a Folder, but to choose what for decks is another thing entirely. Especially if such decks are either:

A: What Everyone Plays B: Are good, but have since been outdated by a year C: Are Tribal Leaders in a Specific Sense (No Morophon, the Boundless please.) D: Not Underdog CMDRs. E: Other.

Let's Just assume we use that cEDH Deck Tier List One-by-One; but w/ a new rule for Playtesting such decks so none of the cEDH Decks win out of overall ratios ~100% of the time; CHANNELFIREBALL-style. That said, From using the Tier List, I require the following CMDR Decks to not have cEDH Level Power, but are these:

The First Sliver (Not as a Sliver Tribe Leader)

(NOTE: Unknown if Kraum, Ludevic's Opus & Vial Smasher the Fierce need to be Parters to be of this level.)

Baral, Chief of Compliance (Get your Counterspells Ready!)

But, yeah, you get the picture, right? Since I can't find such decks on my own to put in such a folder for decks worth testing against your own. Rules are as follows though:

I know this is too much for now, but I'm making a folder for Playtesting w/ decks as everyone kept telling me to do so; now I want to hold my end of the Bargain. But I seriously need help from you to do this. If you can find any decks here to add to such a Folder, put it on the comments below.

(& no, It's not like it's a personal thing! Anyone is allowed to use it when it's finished!)

Hello again. I'm throwing around ideas and what do you think of Geode Golem + Sisay, Weatherlight Captain or General Tazri to tutor out Zada? And what about spellslinger and Talrand, Sky Summoner / Noyan Dar, Roil Shaper / Jeskai Ascendancy -like spells and free range spells like Manamorphose / Gitaxian Probe / Invigorate ? And if we are doing token/clone stuff I would think Blood Artist / Falkenrath Noble / Poison-Tip Archer would be a good wincon.

Gilady089 as stated before The First Sliver is a better combo piece for Food Chain then both Niv-Mizzet Reborn or General Tazri He belongs there.

The combo has 3 components:

Our commander, The First Sliver

From there, you have cascaded Laboratory Maniac into play, cascade Tainted Pact or Consultation to exile lands, and set up to draw a card. You can also Timetwister (or Memory's Journey) + Noxious Revival loop Extract to exile opposing decks or make infinite Swan Song swans.