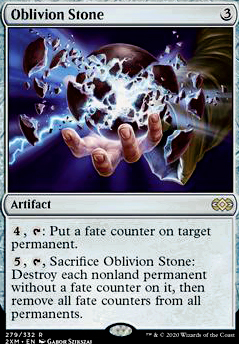 , , Sacrifice Oblivion Stone: Destroy each nonland permanent without a fate counter on it, then remove all fate counters from all permanents. 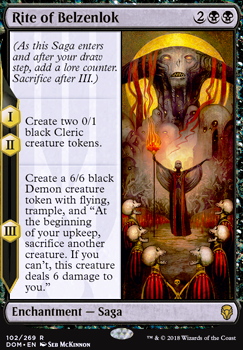 Who Says Green Can Only Ramp?
by Catpocolypse

What is the purpose of Underworld Dreams and Yawgmoth's edict? Meta?

I would swap Grim Tutor with Diabolic tutor. It does cost 1 more mana, but in this build, I would argue life loss hurts a lot, despite all your life gain. Moreover, it would free up funds for more powerful cards that don't have a redundancy.

I know you have the swamp synergy but have you considered Blast Zone?

Nevinyrral's Disk - For when everything goes to hell, cheap $. Also see Oblivion Stone since these both deal with artifacts and enchantments as well

Feed the Swarm - Enchantment removal in black is huge, don't underestimate it. While it's sorcery speed and the life loss hurts, it seems you have enough life gain to hopefully mitigate this? I know it's in your mayeboard probably for that reason.

I've played against this commander deck several times, although each one was slightly different, they were all pretty much the same. The deck is extremely reliant upon it's commander, which most players will notice after a few games. You need more ways of protecting your commander. Whether its the Imp's Mischief sitting your maybeboard begging to be put in as crazy utility - Counters counterspells, redirects targeted removal/draw/extra turns, or good old Swiftfoot Boots as redundancy to greaves while allowing to swing in for hasty life gain, you need to protect your commander. If you were able to run coffers and command beacon with more ramp, it wouldn't be an issue. But given your budget, recasting your commander is gonna hurt (lifeloss or otherwise).

Defile - Cheap $ and to cast and instant speed.

Deliver Unto Evil - Get back aetherflux, bolas citadel, politic with an opponent (Ex: 1 combo piece back to your hand if you get a boardwipe to destroy the green player)

Idk if there are a lot of PW's in your meta given your choices of removal spells, but you should definitely consider Oubliette - Given it's new ruling, it's very powerful against other decks that can't interact with enchantments or just don't have the removal in hand. It's cheap $ too

Last but not least, not a serious suggestion but something worth noting is Worst Fears - This card wins games. Taking their turn and using their removal on their own creatures, sending their commander to the grave, wasting their draw spells, etc...

Some includes to think about are;

Tetzimoc, Primal Death to target enemy creatures from hand with Dismiss Into Dreams on the field.

Pernicious Deed puts in work. It's a threat that keeps opponents from playing stuff until it's gone.

Protean Hulk is a great creature tutor, especially when paired with Greater Good or Diabolic Intent

Nice take on the Deck, just have the feeling that some cards are relatively random, like Big Game Hunter for example? And I think you could replace some control elements like Pernicious Deed by more synergetic cards like Oblivion Stone to name a few. But really cool deck still.

PurePwnage SynergyBuild isn't a troll, just a very well informed player who doesn't sugarcoat anything. They're not wrong about their arguments, although many of their suggestions might take the deck down a path that I'm unwilling to take it.
Regarding board wipes, removal shouldn't be a part of this deck. If it is, then I can't really justify running a 6 mana enchantment combo whose primary purpose is to invalidate creatures.
Greater Auramancy might be ok as sideboard tech, but it definitely shouldn't be run maindeck as Nine Lives already has hexproof, which is its primary advantage over making 'just another Phyrexian Unlife combo deck'. Additionally, the whole point of my counter-magics are to invalidate enchantment removal while providing additional flexibility. Greater Auramancy is just more narrow.
Let's also be realistic here because too much redundancy is also a bad thing: What modern deck runs Thoughtseize, Blood Moon, AND Oblivion Stone? Thoughtseize is annoying, but most aggro decks don't run it. Jun[d/k] run it, along with assassin's trophy, but jun[d/k] are two of the biggest natural predators of combo decks due to the heavy and diverse disruption suite they run. I'd rather not invest too much into fixing a bad matchup, other than maybe including some Greater Auramancys in the sideboard.
Blast Zone is my biggest actual threat. Pithing Needle can fix that, and so can some Ghost Quarters, so running some of those in the sideboard may be worthwhile. Based on the number of decks running Blast Zone, Pithing Needle may even be worth mainboarding instead of Hex Parasite.
With that tech in the sideboard to help ameliorate bad matchups and cards that are very hard to answer, any remaining threats can (hopefully) be countered, and I'm left with a few slots to reinforce matchups that might flip after the sideboard.