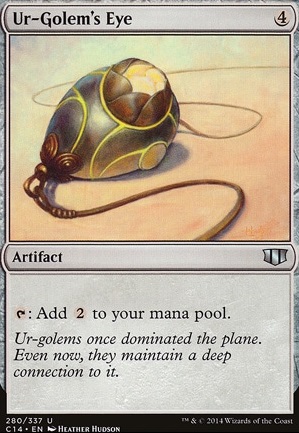 Ur-Golem's Eye occurrence in decks from the last year

Greven One Punch
by ashaman_snachy 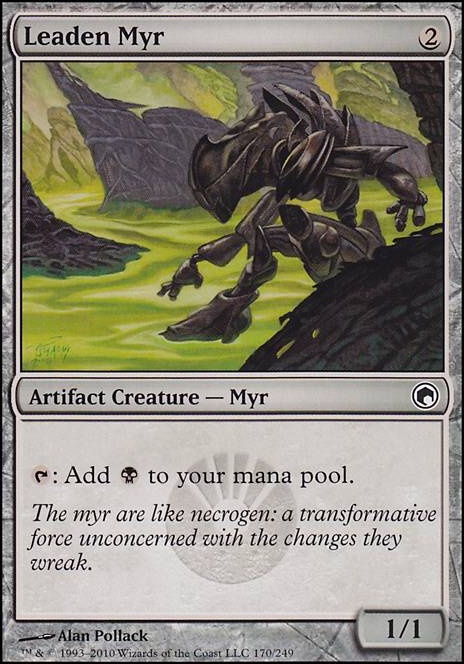 You may want to switch out Ur-Golem's Eye for a Thran Dynamo.

Some dwarves just want to see the world burn

cool deck. how is it possible you are running Ur-Golem's Eye and not Sol Ring?
also feel like you want Pyrohemia in here.
and Rite of the Raging Storm is good at lowering life totals...
and i know it is costly but you already run Mana Geyser so Reiterate would be a good inclusion...

A couple ramp cards I think are underrated are Sisay's Ring and Ur-Golem's Eye . Sure, they aren't Sol Ring and Thran Dynamo but no other cards are - strictly speaking. My rule of thumb is the ramp should have at least 50% immediate profit - i.e. if you pay 2 for it, it should be able to tap for 1 etc. The only thing I have against Worn Powerstone is that it coming in tapped means it has no immediate benefit potential. Don't get me wrong, it is a good card and I don't not recommend running it, I would just also consider the 2 I mentioned.

Oh hey, I thought the Eldrazi deck was pretty cool. If you ask me, Kozilek is really the only viable colorless Commander out there.

I'd try to include Silent Arbiter , Portcullis , Crawlspace or something along those lines to keep creature decks from going wide and overrunning you when you're in hard-ramp mode and can't defend yourself in the mid-game (or when Kozilek is really your only blocker in the end-game).

Also, Ur-Golem's Eye , Blinkmoth Urn , Everflowing Chalice , and Astral Cornucopia can all do some serious work in ramp-hard decks. Probably better than a few of the rocks you already have in the deck.

Other than that, cool stuff

Of course! The cards I would remove are Noxious Gearhulk (high cmc for a card not really super on theme or that abusable in this deck), Bolas's Citadel (only good in a really low cmc deck, and this is not that), Acquire (no guarantee that an opponent will have any good artifacts for you to take, something more important than Steal Artifact, because it's not inherently removal like Steal Artifact is), Trinket Mage (3 mana for a card that can only tutor 4 cards, two of which are Expedition Map and Wayfarer's Bauble = very meh), Rune-Scarred Demon (7 mana for a tutor is way too expensive), Personal Tutor (super slow at sorcery speed tutor to top of deck), and literally the entire category of clones (stealing is cloning plus removing, so strictly better).

As for my suggestions, the three reanimates are useful because they let you reanimate from opponents' graveyards for very little mana investment.

The three "narrow" cards will always have a target worth using them on. I've seen people concede when I cast Steal Enchantment on their Mind's Dilation or Omniscience.

As for my higher cmc suggestions, I've found that this deck does best with these expensive cards and ramp that can support that. At the moment, your ramp would definitely not be able to enable casting that many high cmc cards, so I would upgrade all the ramp that only produces one mana (which has the exact card-to-mana ratio as a land) to ramp that produces two or more like Thran Dynamo , Worn Powerstone , Sisay's Ring , Ur-Golem's Eye , Everflowing Chalice , Hedron Archive , and even Firemind Vessel if you want! Do that, and not only will you be able to cast higher cmc cards more easily, you'll also be able to be way more explosive in the mid to late-game.

Lastly, I'd say to not underestimate Memory Plunder. At its baseline, I find it's usually an instant speed board wipe, but it has the potential to do a lot more craziness. Think of it more like a tutor that lets you cast what you tutor for free at instant speed, except it only lets you tutor what's already in opponents' graveyards.

Thanks, and stay awesome!