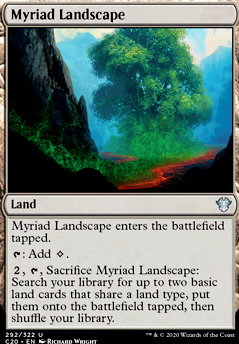 , , Sacrifice Myriad Landscape: Search your library for up to two basic land cards that share a land type, put them onto the battlefield tapped, then shuffle your library.

King Macar Vehicles All Gold Everything
by industrialterp

Yeah gdm1989, Phyrexian Obliterator is really brutal, but a bit out of my price range for a single card. I'm looking at cutting a couple of creatures to add some more early card draw. I'm testing Foulmire Knight as it serves double duty as an early defensive creature, and late card advantage, leaving behind a relevant body that can easily trade up.

Also, if anyone has any experience with Myriad Landscape in EDH, I'd like to hear how it plays. I'm thinking it might fit well into this deck as I have plenty of "swamps matter" cards, and this can get me 2, and even ramp me on a turn where I have nothing to do. I'm not sure what I would cut for it, either another nonbasic land, or a Swamp, seen as it will end up fetching me a Swamp.

Another card I'm proxying to test out is Sword of Sinew and Steel as a way to remove Artifacts. The protection from Black/Red also looks useful, a lot of the removal and creatures I face are Black, so it might act as effectively a Whispersilk Cloak with big upside! I think it might work well with my high creature count too, giving +2/+2 on top of relevant Protection just seems like it's going to keep anything I strap it to alive!

Birthing Boughs could be useful, it turns into a 4 mana fact or fiction + leave behind a dude

Myriad Landscape is a very, very, very slight form of ramp, maybe worth it

Universal Automaton is now a 1 mana 1/1 sphinx, not a bad idea

Archetype of Imagination grants your board flying, evasion is always good

Endless Atlas - Almost as good as tome of legends

Hedron Archive - Ramp when you need it, card draw when you dont

Humble Defector - Politics, not needed but nice to have, especially in more casual builds

I got a lot of ideas for cuts, lmk if you're interested