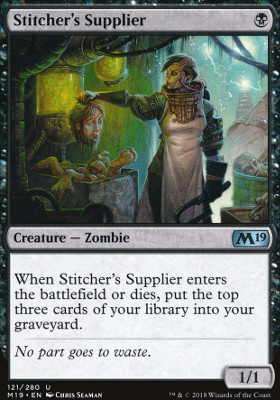 When Stitcher's Supplier enters the battlefield or dies, put the top three cards of your library into your graveyard.

Stitcher's Supplier occurrence in decks from the last year

Lurrus seems incredibly fun- but not necessarily for a control deck. Although Orzhov control, while lacking in counter spells, has basically everything else you need.

Itâs got board wipes, premium removal, card advantage, and a vast assortment of finishers.

If you did go that route I would play a lot cheap permanents like Dark Confidant and Stitcher's Supplier for card advantage, Bitterblossom for lots of blockers. Notreally any aggressive cards. You finishers being walkers like Elspeth, Sun's Champion and Sorin, Grim Nemesis.

Dude, Rotting Regisaur looks nasty! Liliana, the Last Hope would be a great fit when I've got the $$$ for some more magic cards! lol.

Experimenting with new removal spells all the time. I've had both Fatal Push and Spark Harvest in the deck and like them both.

You're right about Soul Stair Expedition being slow. I had a bunch of crack lands and thought it might be worth a try. I'm currently trying out Grim Discovery. Think it will be nice for digging a Stitcher's Supplier or a Carrion Feeder AND a crack land for the Bloodghast. Limited testing on that card.

I play on MTGO, so these decks are changing often!

Have quite a few play hours in. Deck runs really well.

Thanks for the advice buddy!

Hey Valengeta, nice job! I like your build and write up.

Here are some suggestions that you may like - first of all, Nantuko Husk is a great way to sac zombies. Itâs expensive as compared to the Carrion Feeder, but it can block. Iâve found that not being able to block with 1 drops can be tough. Cryptbreaker and Stitcher's Supplier are options, the former generates zombies for you. Or you could run both Feeder and Husk for extra sacâing.

Also, this deck could benefit from a splash of white. With 4-8 fetchlands plus a couple of Godless Shrine, plus an Isolated Chapel or two, you can run Tidehollow Sculler, Wayward Servant, and Path to Exile, plus artifact/enchantment hate in the sideboard. Otherwise, you may have a hard time against those match ups :)

Great deck, I built my own budget version.
What do you think about cards like Stitcher's Supplier, Stinkweed Imp and Golgari Thug to fill up the graveyard? Since the deck has lots of tutors and is built around GY recursion it might help? And what do you think about Lurrus of the Dream-Den ?